Since then, I’ve learned the second lesson of renewable energy: while the energy may be free, it still costs more than electricity from a utility company. This may not be obvious, so let me explain. The following are the approximate prices for the equipment we have now, materials only – installation is extra:

If you assume that we receive eight hours of sun and eight hours of wind per day (a generous assumption), we would produce 487 kW-hours of electric energy per month from renewable sources. This is almost half the 920 kW-hours per month that was used by the average American home in 2006.

Assuming the equipment has a 20-year lifespan, it will produce 116,880 kW-hours of energy during that time, and my prorated cost for the equipment will be $0.23 per kW-hour. That’s more than twice the average cost of the same amount of energy from the local utility company.

On the days when there’s not enough renewable energy, we recharge the batteries using a gasoline generator, which produces approximately 3.5 kW-hours of electric power for each gallon of fuel burned. This translates to an efficiency of approximately 10%, with a fuel cost of about $1.00 per kW-hour given the current price for gasoline in 2008. Compare this to a coal-fired power plant that has an energy efficiency near 40%.

That means that the carbon footprint of my generator is more than three times as large as a coal-fired power plant for the same amount of electric energy produced. If my generator burned propane, its carbon footprint would be slightly smaller because the proportion of carbon in the fuel is smaller. If it burned diesel, the footprint would probably be smaller still, because the efficiency of a diesel generator can approach that of a utility power plant.

In summary, this is what I have learned about renewable energy by living off the grid:

This doesn’t mean I’m against renewable energy, just that given our current technology, living off the grid is not as simple and cost efficient as many people may think. 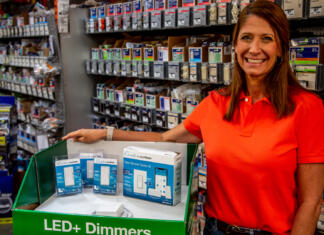