Garage ventilation — or really, lack thereof — is a common problem for homeowners.

Think about it: The heat from your car acts as a generator when it reacts with hot, moist air in the garage. Then, mold and insects are attracted to this type of environment.

Not to mention it’s just plain miserable to be in a garage for any length of time without ventilation. Think of the discomfort and poor indoor air quality while you’re lugging groceries into your home.

You know the problem; now, here’s the solution: You need a fan that moves the hot air out and is controlled by a thermostat. Even better, a programmable thermostat or a smart thermostat that you can control with a mobile device.

So, find a wall to install a 12-by-12 or 16-by-16 exhaust fan. After installation, set the temperature to 80 degrees — when the temperature in your garage gets to this temperature, the fan will turn on.

Louvers on the outside of the fan will open and then exhaust the hot air. If the fan is positioned higher up on the wall where the hot air is rising, the garage ventilation will make a significant difference.

Listen to the Today’s Homeowner Podcast to also learn about these topics:

Easy Shingle Replacement — If your home or shed is sided with wood shingles, sooner or later you’ll need to replace a damaged shingle.

First, use a hammer and chisel to split the damaged shingle into several narrow strips, then pull them out. Next, cut a new replacement shingle about ¼ inch narrower than the open space between the two existing shingles.

Slip the new shingle into place, stopping when its lower end is about ½ inch below the adjacent shingles. Then drive two galvanized shingle nails up at an angle through the new shingle and into the wall. Position each nail directly below the butt edge of the course above.

Now—this is the cool part—use a hammer and wood block to tap the replacement shingle up the final ½ inch, which will drive the nail heads under the shingle above.

Pulling Up Pavers — When it’s necessary to remove a concrete block or paver from your patio or walkway, try this trick: Take a wire clothes hanger and cut two pieces about 10 inches long.

Now, slip the wire fingers into the joint on each side of the paver. Twist the handles 90 degrees so the fingers turn beneath the paver. Then, simply pull up to remove the paver.

Question of the Week

Q: Will oriented strand board hold up as well as plywood? I was charged for plywood and instead had OSB installed. Should I ask for the difference back?

A: We recommend not to use OSB on anything. If they charged you for plywood and it says they put plywood on but used OSB, definitely ask for your money back — and question why they did not adhere to the contract. Plywood is much better at resisting moisture than OSB — especially for a roof.

Other Products and Links Mentioned

Ask a question and we could answer it on the "Today's Homeowner Podcast!" We also may use it on our nationally syndicated radio broadcast or on todayshomeowner.com. 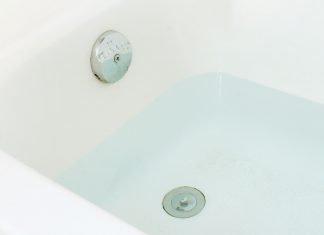 This week on the Today's Homeowner Podcast, we tell you how to remove a tub drain when the crossbars are corroded. Listen here to find out the answer!

What to Do About Leaks From Plumbing Fittings | Ep. 146