Danny returned to the Mississippi Gulf Coast to view the progress of rebuilding in the aftermath of Hurricane Katrina, which made landfall on the morning of August 29, 2005. He revisited homeowners whose houses were completely destroyed to offer practical advice for preparing for future natural disasters.

Hurricane Katrina changed the way homes are being built and rebuilt. Building codes have changed, and while they’re often treated as the highest standard that must be met, those who lost their homes to Katrina know the real standard is a structure that will survive both wind and water.

Rebuilding seemed like a distant dream to Mark, Mrs. Ward, and many others; but slowly some have been able to work with contractors to put their new homes together. The wheels haven’t turned quite as quickly for others.

In addition to hearing from some of the residents who were impacted by Katrina on the Mississippi Gulf Coast, Danny also shared insights on the importance of mold mitigation, took a look at new building codes, and saw first hand how the generosity of volunteers has helped many to get back on their feet.

Preparing for Storms and Other Natural Disasters

Important items to remember when a storm or natural disaster threatens your area include: 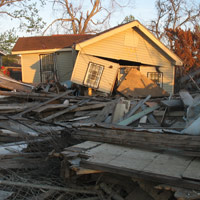 It’s hard to believe so much time as passed since Hurricane Katrina devastated the Gulf Coast. I’ve been around this area pretty much since Hurricane Camille in 1969 and have always remained in my house during hurricanes. I live on the water and watched as several of my neighbors’ houses flooded.

Providence was smiling on me, for some reason, as I watched the water cover the back step of my porch before receding. I was lucky, but many were not.

I spent the next several months in the New Orleans area and in Slidell, just north of New Orleans. I was totally unprepared for what I saw. It was as though an atomic bomb had gone off. I tell people all the time that I felt like Charlton Heston in The Omega Man.

It was spooky to walk the neighborhoods and not even hear a bird or a barking dog. I inspected over 100 homes myself, most completely destroyed. Yet, with all respect to New Orleans, the Mississippi coast got hammered even worse.

The aftermath of the storm, in my opinion, did even more damage. When you take the heat of a Gulf Coast summer, combine it with no power, standing water, and no way to get back and repair the damage . . . well, this is why the mold took over.

Now, was it a “killer mold” that invaded? My first reaction would be to say no. The media, as it so often does, likes to blow things out of proportion and over-hype a story. In fact, it was the media that dubbed mold as “the asbestos of the new millennium.” It’s a ratings game for them.

However, this wasn’t an ordinary situation. This mold did, indeed, affect more people than it normally would have. If you think about the fact that mold spores outnumber pollen 10 to 1 during the peak of the season, and we are constantly breathing them in, it’s no big deal because our immune system simply kills them.

The problem, though, is that there was an explosion of mold and it wasn’t small amounts being ingested, but a continual breathing in of mold 8-12 hours a day. In cases like this, your immune system simply can’t keep up with the kill orders!

The mold is given a chance to grow inside and then cause inflammation and other health problems, and that’s for people with normal health issues. Think about how awful it was for those who had allergies and asthma.

So, no, it wasn’t a killer mold, but there are concerns you should be aware of. Dr. Charles Runels has graciously agreed to give us more insight into this take on mold health issues.

One of the biggest challenges in the days following a disaster, hurricane or other, is finding a competent contractor. Danny gave you a few tips to avoid being ripped off, but I wanted to mention one other piece of information. I think the Better Business Bureau is a fabulous organization, but do NOT rely on them to provide a contractor! To be perfectly frank, I can create a name, pay a fee to the BBB and, voila . . . I’m a member of the BBB with no complaints filed against me.

Instead, find out what body regulates licensing in your state, and check with them on the status of a particular contractor’s license. Ask the contractor to see a copy of his license, too. Believe me, a “bona fided” contractor won’t mind.

And, whatever you do, make sure the contractor is fully insured. Otherwise, any injuries that happen while on your property could become your responsibility.

Check out our Hurricane Help page for more information.

If you tackle your own home maintenance, sooner or later you’ll end up on a ladder. First things first, think safely and establish the correct angle of the ladder against the house. The general rule says that there should be a 4:1 ratio, meaning if the ladder is 16’ tall, the base of the ladder needs to be about 4’ off the house. In easy way to get the right angle is to simply place your toes against the base of the ladder and grab a rung of the ladder at about shoulder height. Extend your arms straight out and at that point the top of ladder should hit the house. Another thing to remember is that when you’re working on a ladder you want your hands free. One way to do that is take a wooden dowel, cut it about a foot longer than the width of the ladder and then slip the dowel through a hole in the ladder rung. Cut a notch in the dowel so you can hook items like paint cans onto the dowel without fear of them slipping off. You can even use an empty paint can as a tool caddy while on a ladder this way. (Watch This Video)

Now you can keep entertaining after the sun goes down with the Solar Market Umbrella from Hampton Bay. The 9’x7’ rectangular patio umbrella contains eight steel ribs on the underside with a total of 30 solar lights attached. With built-in lighting there’s no need to run electrical wires or extension cords and because the lights are solar powered you might even save a little on your utility bill. The polyester fabric top is both durable and easy to clean when necessary. The crank lets you tilt the umbrella as needed when the angle of the sun changes during the day and you can adjust your night lighting as needed. For less than $120 it’s easy to add a little mood lighting to your outdoor entertaining area. The Hampton Bay Solar Market Umbrella is available at The Home Depot.

Around The Yard with Tricia Craven Worley:
Wheelbarrow Tire Fix

Looking for mudroom ideas? We're building a small hall to separate the garage from a home's side entrance, making it more inviting for guests.