A friend recently invited me to a most incredible sight, the annual migration of chimney swifts. En route to Peru, these birds flood through western North Carolina in early October, and watching their evening roost has become a community pastime.

For just ten days, at precisely 7 pm, people and cameras line the balconies – especially the ones with a good view of a chimney – to watch the nightly performance, and this year I was among them.

Like the most synchronized of dance troupes, the swifts slowly gather and begin circling in the air. First clockwise, then counterclockwise, with incredible precision and grace, seemingly of one mind. Then, as they circle, one by one they dart down the chimney to roost for the night.

The evening roost takes about 30 minutes and it’s quite a sight to behold! From my perch on a high parking deck in downtown Asheville, North Carolina, I was able to shoot the short video above just before darkness took over, with the chimney – their roosting spot – in the foreground.

During the summer, chimney swifts are common sights in the middle and eastern United States and Canada, albeit in smaller numbers than during migration season. They originally evolved to nest in hollow trees, but as the modern world spread, they quickly adapted to nest and roost in brick chimneys.

Their bodies are so specialized that they can only perch on vertical surfaces, with stiff tail feathers that bolster their perch and add agility to their flight. On summer evenings, these sleek birds come out to hunt for insects, swooping and darting through the dusk. 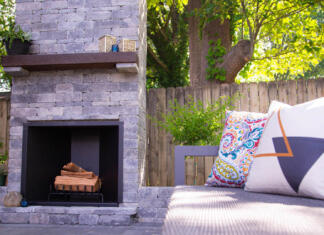 Outdoor Fireplace: Create a Focal Point For Your Patio

Whether you’re having a gathering with friends or unwinding after a long day, an outdoor fireplace is an investment that you will enjoy for many years.

How to Whitewash a Brick Fireplace

Stay Warm and Safe With These 4 Fireplace Maintenance Tips

How to Transform a Brick Fireplace with Limewash