The most secure way to hang a heavy mirror or painting on a wall is to drive a long screw directly into a wall stud. When a wall stud isn’t available where you want to hang a heavy picture, a toggle bolt provides the most holding power.

To install a toggle bolt:

VIDEO TRANSCRIPT
Tiffany Asks: What’s the best way to hang a heavy mirror on the wall?

Danny Lipford: The best way to hang anything heavy on your wall is to use a 3-inch screw and screw it right into a wall stud. You’ll be lucky if you find a wall stud exactly where you want to hang that heavy picture, so you have to go to hollow wall anchors. Lot of different kinds out there that you can use.

What I like to use, always works well, is an old fashioned toggle bolt. And now here’s a nice little trick. Take the toggle bolt and then put a nut, thread it into the toggle bolt, then put a couple washers on it. Then screw the little wing on the end of the toggle bolt. Then use you screwdriver to create a hole in the drywall. And then when you place it in and tighten it up real nice, you have a great, very strong, wall anchor. 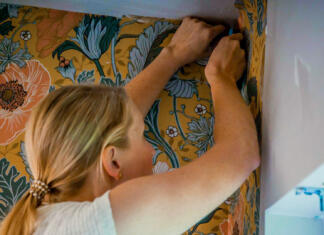 How to Hang Wallpaper

A bold-print wallpaper can make a statement and add excitement to a dull space. Here's a step-by-step guide on how to hang wallpaper.

How to Cut and Hang Drywall

Patching a Hole in Drywall and How to Prevent Abuse

Drywall: What You Should Know and How to Install

Stop Leaks in Their Tracks with This Smart Water Monitor