Nothing transforms a patio from average to high-end like a built-in barbecue grill. But if a full outdoor kitchen is not in your home improvement budget, you can build a grill surround with pavers to get the look.

Building Around the Grill

A common question I hear is, “Can I use a regular grill for a built-in?” Yes, you can! You don’t need the most expensive grill to have a built-in. But you will need a grill that’s fairly easy to build around.

Ideally, the grill shouldn’t have shelves that stick out. For this project, it’s best to use a grill that’s easy to build around by laying simple paver blocks that don’t require lots of cuts.

Creating a grill surround with Pavestone Rumblestone is simple and affordable. Rumblestone blocks come in dimensions that allow for infinite variations during assembly.

We’re using the Petry family’s old grill as a model for what the new built-in grill will need to look its best.

How to Build a Grill Surround

First, we remove the wheels from their gas grill and replace them with a base made of these blocks.

Then, in lieu of a folding table on either side of the grill, we’re building a square column with the blocks. For the dimensions here, we’re alternating between one large block and two mini blocks as we work around the square.

For this built-in grill’s next row, we separate the minis so there’s a single one on either side of the large blocks. This allows us to overlap the previous row’s seams, strengthening the structure as we build upward.

That’s just one piece of this paver puzzle; next, we apply construction adhesive between each row to ensure that each block stays in place.

When we reach the top of the grill, we use a thinner version of the large rectangle to cap the column and serve as a countertop.

Finally, we stack several rectangles at an angle on the grill’s backside to create a series of vents for the grill’s heat.

With this grill surround complete, we’ve made an off-the-shelf grill look like a fancy built-in. Best of all? It’s both attractive and functional.

That’s all there is to it — watch the video above to see the entire process! 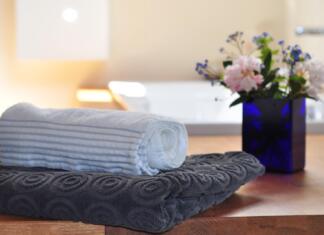 Need ideas to turn your boring bathroom into a spa? These simple changes can transform any bathroom from a routine stop to a serene sanctuary!

Vertical Garden: How to Build One From a Pallet