Over the range (OTR) mounted microwave ovens can save space in your kitchen, but the exhaust fan in a microwave often just recirculates the air, rather than venting it to the outside.

Since a range hood protrudes further, it also does a better job of capturing smoke, steam, and cooking odors and venting them outdoors.

VIDEO TRANSCRIPT
Danny Lipford: People remodeling their kitchen often ask what I think of microwaves mounted over the stove. While I understand the desire to save space, I usually advice against it.

Whenever I can, I replace over-the-range microwaves—or OTRs—with a proper vent hood, like this one we’re installing from NuTone. That’s because most OTRs only recirculate cooking fumes through a filter and back into the kitchen.

Now, even if they do vent outside, they just don’t cover enough space to adequately capture all of the smoke and steam generated in most kitchens. Not to mention the danger of small children climbing over the stove to reach the microwave.

A properly sized, installed, and vented range hood will do a vastly superior job of removing cooking fumes from your kitchen. And, in the process, you’ll improve the indoor air quality of your home. 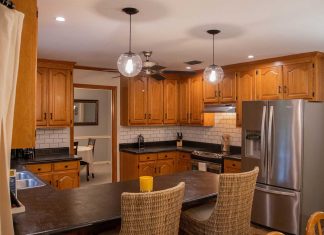 We're bringing an '80s-style kitchen into this decade with a two-part episode. Catch up on the projects we tackled in part two here!