Wooden decking that has rotted or deteriorated over time will need to be replaced. Start by using a hammer and pry bar to remove the old deck boards. You can also insert a long board between the decking and joists to pry the old deck boards loose.

After all the old decking and nails have been removed, pull a string or extend a straight board on edge across the floor joists to make sure the joists haven’t sagged. Replace or shim up any sagging joists before installing the new decking.

Align the first deck board perpendicular to the floor joists and overhanging the outside edge of the deck. Screw the board in place using 3” long, rust resistant deck screws.

Pressure treated deck boards which have been kiln dried after treatment (KDAT) will expand slightly in width after installation, so use an 8-penny nail as a spacer to leave a 1/8” gap between the boards.

Boards that haven’t been kiln dried after treatment and are still wet with preservative will shrink slightly when they dry, so butt them closely together when attaching.

To straighten a crooked board, attach one end of the board to the deck joists, and then pry the other end into place before securing it.

Leave the deck boards longer than the deck, so they hang over the outer edge of the deck by several inches or more. After all the deck boards have been attached, pop a chalk line an inch or so past the end of the deck foundation and use a circular saw to cut the decking to the finished length.

VIDEO TRANSCRIPT
Danny Lipford: In order to re-cover an existing deck, you have to first remove the old rotten deck boards. It’s important to do this carefully so that you don’t damage the framing beneath that you want to keep. Hammers and pry bars will do the job, but you speed up the process by using a long piece of lumber for more leverage to pry the boards free.

When all the deck boards and nails have been removed, inspect the framing for any needed repairs. It will be easier to correct any sags now before you install the new deck boards.

If the long side of the boards will be exposed on one side of the deck, that’s a good place to start with a full board width. When the board is aligned and perpendicular to the joists, begin securing it to them. Coated deck screws are the best method, since they stand less chance of working free. For these two-by six deck boards, we’re using three-inch screws.

This lumber was kiln dried after treatment, so we are using an eight-penny nails as a spacer between each row. Regularly treated boards will shrink after installation, so you may want to butt them tightly together to allow for that.

Occasionally a bow in the wood will require you to secure one end and pry the other end into place before securing it. On the open end of the deck, we’re letting the boards just run long so we can come back later and cut them all at once for a good straight line. 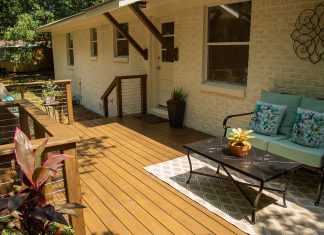