This 8’ x 8’ greenhouse is perfect for keeping your plants warm when the temperature drops, and to give you a head start in spring on growing plants and seedlings for your garden. We used green plastic panels for our greenhouse, but clear panels will allow much more light and heat inside the greenhouse.

Start by building the frames for the front and back of the greenhouse on the ground from pressure treated 2”x 2” lumber. Cut the framing at the following angles:

The front and back frames are identical, except for an extra horizontal 2×2 on the back frame for the bottom of the window.

The front and back frames were joined together with 8’ long 2x2s:

Two side wall studs and rafters were then added to each side on 32″ centers. Temporary diagonal braces were attached to the side walls to keep the frame square while the plastic panels were installed.

Corrugated plastic roof panels were attached to the roof and sides of the greenhouse using self-tapping screws with rubber washers. Cover the front and back of the greenhouse first, starting at the bottom and overlapping each panel over the one below.

The panels on the front and back were then cut flush with the frame using an abrasive blade in a circular saw. Be sure to wear a respirator or approved particle mask and safety glasses when cutting the panels.

Position foam gaskets on the side frames. Center a plastic panel over the ridge of the roof, and attach it to the frame with screws. Apply the panels, working from the top down each side, making sure to lap the upper panels over the lower ones.

Cut the window and door opening in the plastic panels using a circular saw and abrasive blade.

Use the leftover scraps of 2x2s to make eight angled shelf brackets. Attach the brackets to the side frames with 3” screws, and connect the brackets together across the front with 8’ long 2x2s.

Attach pressure treated, 1×4 shelving to the brackets with 2” screws leaving a gap between the boards for drainage.

Cover the ground with a sheet of plastic to keep out moisture.
Apply a layer of gravel on top.

Attach the window to the opening in the back wall of the greenhouse with screws. Plumb and level the storm door in the opening, and attach it with screws.

Danny Lipford: We’re building a budget backyard greenhouse for my neighbor and friend Storey Walters, so she can continue to enjoy her gardening through the colder days of winter. Allen and I are working from a design I perfected 30 years ago to build and sell these things when my remodeling business was a little slow. We’ve nailed down the layout, and started making our cuts for the template wall. Now, it’s time to start piecing it all together.

Allen Lyle: These two come together.

Allen Lyle: So, I need to just mirror this on this side.

Allen Lyle: Basically, all the cuts.

Danny Lipford: Right. The only thing would be whether or not we’re still, I don’t see where anything would throw it off side to side, even though it has. Let’s see, maybe . . .

Allen Lyle: We’re not square down there. I mean, it’s all going to come this way a little bit, I think.

Danny Lipford: There. Okay, all right. Okay, good. All right, well go ahead and do that cut. One more of those.

Danny Lipford: Same angle. One more of those.

Danny Lipford: So while Allen makes the final cuts, I get the nail gun ready, so this thing can start going together. The first piece comes together fairly quickly.

Well, just almost exactly. All we’ll need to do, we’ve got a 32-inch window just like the width of the door. We’ll have one two by two going down there for the bottom of the window. And then, that’s it. We can put this together. Put another one together, we can start assembling it down there.

Danny Lipford: With all the angles and lengths figured out, the other end goes together very quickly, even with the addition of that extra piece for the bottom of the window. Now, we move to the location where the greenhouse will sit and begin filling in the framing between these two end walls. By connecting the two ends with eight-foot two by twos, we’re establishing the final footprint of the structure. But it’s a little tricky, because the whole thing is very fragile at this point.

This is actually the trickiest part of the whole thing. Because you just feel like it’s all going to fall over.

Danny Lipford: But it won’t, not with you there.

A total of five boards join the two ends before we can begin adding the vertical supports in the middle.

Now, Allen and I will be putting the fiberglass on the ends first. Squaring things up, we’ll trim it all out and then start with the main part of it, starting at the top and wrapping it around. It really should only take about an hour and a half or so to put all the fiberglass on.

The panels are secured to the frame with self-tapping roofing screws. These things have a little rubber washer beneath the head, so that they seal the hole they go through once they’re tightened. As you go up the wall, each panel overlaps the one before it by a couple of rows, and the whole greenhouse gets sturdier with each one.

We’re overlapping the ends of the wall, so we can cut them all flush once each wall is complete. A regular saw blade will make a mess of this stuff, so Allen is using an abrasive blade which basically burns through the panel. It also makes some incredibly fine dust, which makes the particle mask a must, if you try this project yourself. We’re covering the two ends first, because the roof and sides have to overlap them. The roof starts with these foam gaskets which help seal off the gaps caused by the corrugations in the panel.

Lining up the first roof panel with equal margins on each side of the ridge and a proper overhang on each end takes a little time; but it’s important, so all of the other pieces will follow suit. Once the first panel is in, the process speeds back up again. One panel after another, working down the roof onto the sides. Before we cover the sides completely, I’m cutting out the openings for the window and door. And figuring out a template for the shelf braces that’ll mount on the walls inside.

The scrap pieces of two by two left over from the framing are ideal for this stuff. We’re mounting these braces to each side support with three-inch long screws, so that the horizontal leg is level. Another eight-foot two by two connects the supports across the front before we mount the three one by fours that form the shelf. The gaps between the boards are actually a benefit, because they’ll let water drain off the shelf when you water the plants.

Finally, we’re putting on the last panel before we begin installing the window. For this chore, you’ll need similar screws to the ones we used on the fiberglass panels, just a little longer. To keep weeds from popping up inside, I’m spreading a layer of plastic inside the greenhouse before we spread the gravel that would form the floor. It’s easier to get your wheelbarrow in if you do this before you hang the door.

Now, is that about one of the heaviest storm doors you’ve ever seen. Gee whiz.

Allen Lyle: I had a different one in mind!

Danny Lipford: Nice and insulated there, so . . .

Danny Lipford: You want to do it that way or . . . or just close it off? Close it first. Close it, yeah. Close it, and hold it over to that side.

Danny Lipford: It’s important that the door is plumb, or perfectly vertical before it’s attached, so that it’ll operate properly. 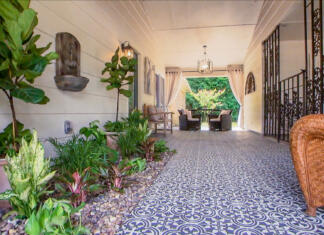