I had heard about the “newspaper method” from Amy Hughes on Today’s Homeowner Radio a while back. The newspaper method is a slow way to soften soil or kill weeds and grasses so you can plant new beds in the spring time. It’s most effective if done during the winter so it has plenty of time to work its magic before the spring planting season comes around.

I’ve been wanting to try it out, but haven’t had a good place to do it until now.

When we first completed the landscaping in my yard at the end of the remodel in February 2012, the yard along my driveway looked like this: 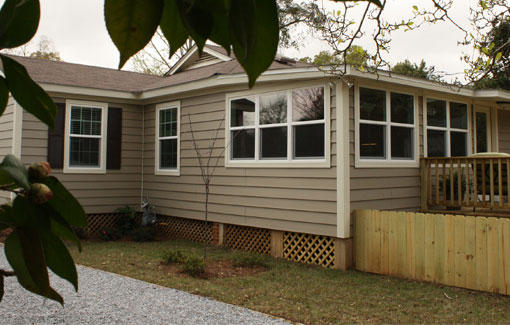 Anywhere there was grass, it was alive and green. But come December 2013, it looked a little more like this: 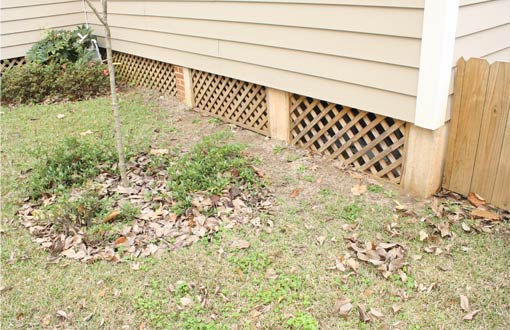 Hopefully you can tell in the pictures that the grass closest to the house has seen better days. It has died and weeds have started growing in its place. It’s a pretty distinguished line where the good grass stops and the dead grass starts. The only thing I can think of that caused this is the sun.

For most parts of the day, the soffit/roof/overhang of the sunroom is blocking the sun from reaching that small area of grass. This is the only place in the yard that borders the house without a landscaped bed. Everywhere else has plants up against the house with pine straw. So this sunny problem does not exist.

My solution is to make this into a natural area. My immediate plans don’t involve any planting, only spreading pine straw to extend the existing bed to meet the crawlspace. That’s where the newspaper method comes in. I’m using it to kill the grass and weeds so they hopefully won’t pop up through the straw.

I started by using some old spray paint to mark the border of the new bed. Normally I’d use actual marking spray paint, but since I didn’t have any on hand, I employed a trusty, practically empty can of white paint. In fact, I barely had enough to finish my vision!

There are more precise ways to mark a new landscape bed, like using a garden hose to layout the bed or a string and gutter spike.

I opted to freehand it since I like to live on the edge and there was room for error. Here’s the new outline on the right side of the existing bed. 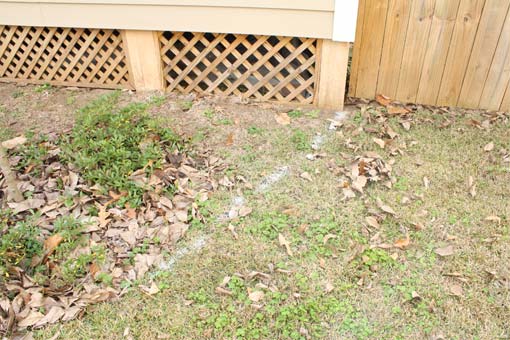 And here’s my first try at the left side. I immediately realized I cut the turn too tight and it didn’t look quite right. 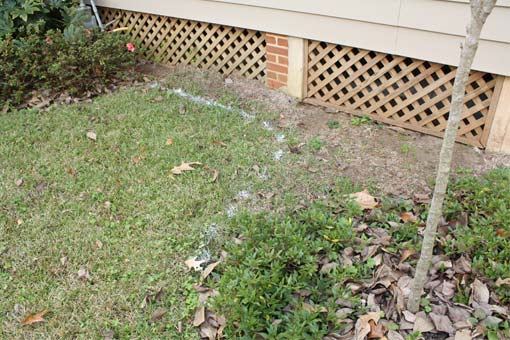 So I gave it another shot and rounded out that 90 degree angle. I Photoshopped the lines to better illustrate where the first line was in relation to the second, and final, line. 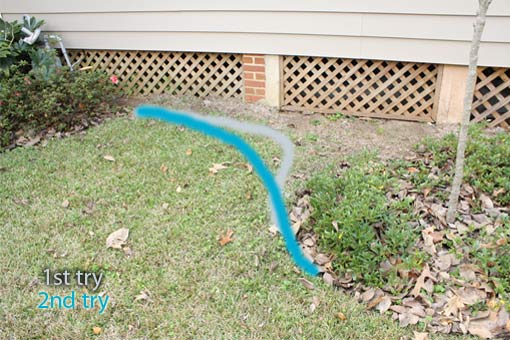 Next I got out the supplies! Since I don’t receive the paper at my house, I had my mom stockpile their paper for a few months. The pump-up sprayer happened to have a weed killer already in it, so I left that in there instead of filling it with water. If you’re trying this in your yard, water is all you really need. It’s just to moisten the paper. But waste-not, want-not, I left the weed killer in there. 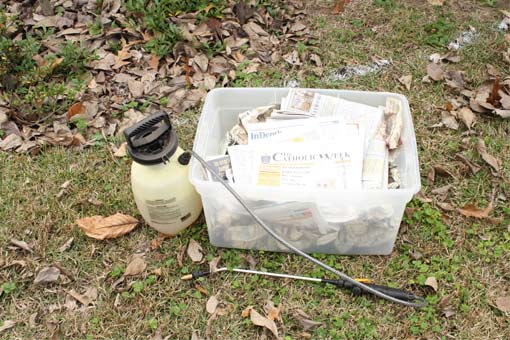 The first step to the actual method is to lay down newspaper on top of the area you want to prepare for planting. You’ll want to put several layers of paper down so it doesn’t disintegrate too quickly. 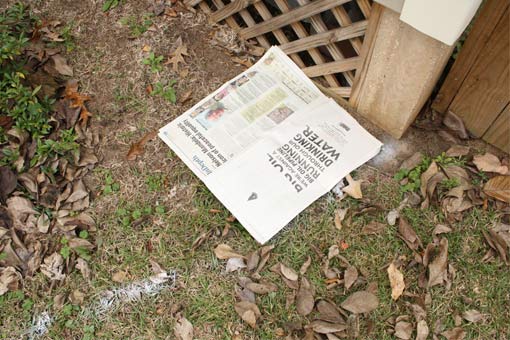 Then after you lay down each section of paper, you’ll want to wet it down using the sprayer. Don’t try and cover too much yard surface with the newspaper before spraying or it can blow away and get irritating really fast! 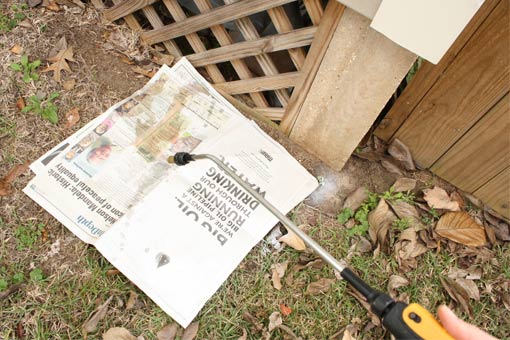 After it had been sprayed sufficiently, it was time to add some mulch to cover the newspapers. The mulch (pine straw, leaves, or any kind of store-bought bagged wood chips or pine bark) serves two purposes-it’s more attractive than newspaper and it keeps the paper moist.

Again, this is something you want to add as you go. I wouldn’t recommend laying out and wetting all the newspaper at once before adding mulch because you run the risk of the paper blowing away during the process and messing up your masterpiece. This is especially true if you’re doing it on a windy, winter day like I did.

I used leaves I had raked up from the other side of my driveway and the front yard (So they were completely free!). 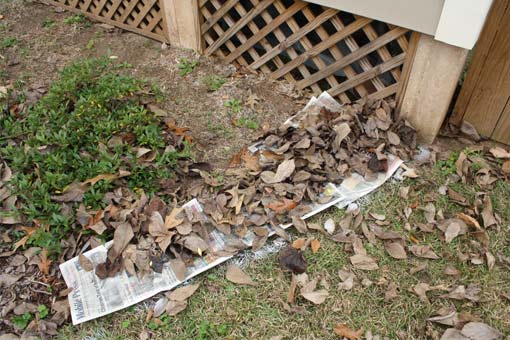 Even though there are only two trees that lose their leaves during the fall in my yard, I’m able to collect enough leaves to fill several trash cans throughout Fall. So I had plenty to work with for this project.

As I was working my way across the bed with the newspaper, I found this glorious Sports section cover! 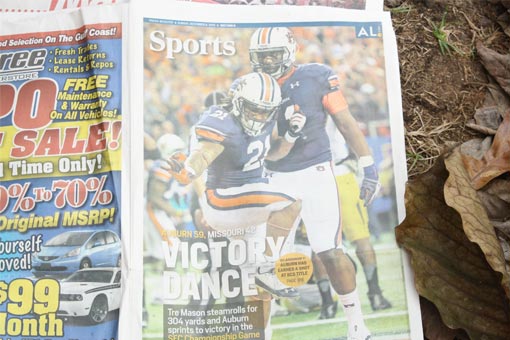 In case you can’t see it, it’s the Auburn Tigers winning the SEC Championship over Mizzou! That was a pretty great day to be an Auburn fan!

But this method works even if you’re team doesn’t have a miraculous come-back season like those Tigers. 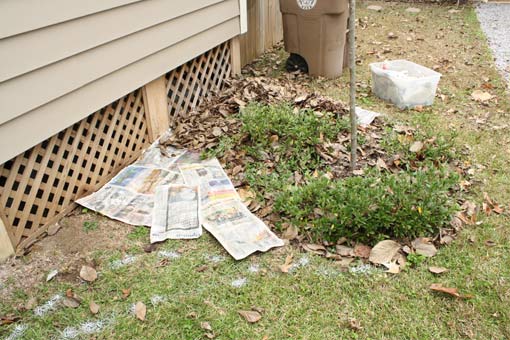 And here’s what I’ll be looking at for the rest of winter. 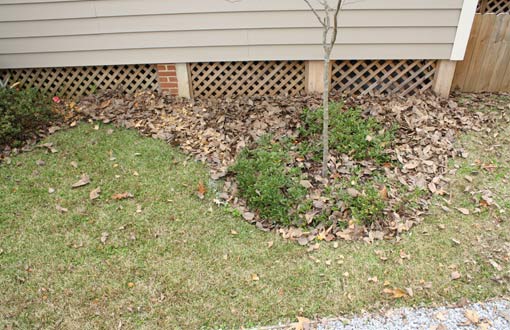 Although the newspaper method itself is a slow-brewing process, the actual process of laying paper down, wetting, and covering with mulch is not that time consuming. It took a total of 30 minutes to do this small section. The only thing left to do is sit (inside in the warmth) and let the magic happen.

In a few months, I’ll be able to rake away the leaves and newspaper and have soft, ready-to-plant topsoil. I’ll post an update to show you my “new” soil and let you know if I change my mind and decide to plant something there. Any suggestions?

Has anyone ever heard of this method? What other methods to do you use to prepare beds for planting season? 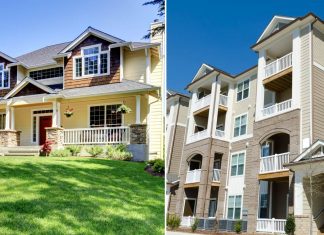