Be sure to clean roof valleys regularly. If the valleys are rusty, clean them with a wire brush and apply rust inhibiting paint.

As they age asphalt shingles can become more brittle and less flexible. That means that if they’re blown up by strong wind, they may break instead of snapping back afterward. Each of these tabs is actually only a third of a complete single and if possible it’s best to replace the whole thing instead of just one tab.

To do this you’ll need to lift up the tabs of the damage shingle and the once above it so that you can remove the nails. Once the damage shingle is free you can replace it with the new one of the similar color and style. Don’t forget to replace the nails from the course above when you nail in the new shingle and cover any nails or nail holes with the glove of roofing cement.

It’s not a bad idea to stick the tabs down with a little of this sticky stuff. Roof jacks around plumbing vents can simply ware out overtime but sometimes they get a little help from neighborhood squirrels who like to sharpen they’re teeth on the lead lees. Replacement is the best solution here and that begins with removing the shingles that lap over the vent base so that you could take off the damage vent and replace it with the new one of the same size.

Nail down the upper side of the vent base and replace the shingle above it, if the shingle is damage you’ll have to notch a new one to take it’s place. The valleys were two planes of the roof meat, often catch leaves and debris and when they do the flow of water is slow down that can create a damage effect and force the water back up under the shingles. So it’s important to keep this area clear sometimes this valleys are covered with metals and if they loss they’re coating they’re beginning to rust and a leak wont be far behind.

A scraper or wire brush will remove the rust but you’ll also want to clean the middle so that you can recoat it with a rusted inhibiting pain to protect the metal taken old care to match the shingles that go a long way in making the roof look better from the street. 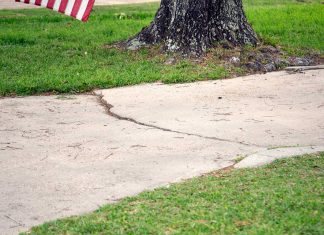 Cracked concrete distracts from your home's curb appeal. Here's how you can easily repair concrete surfaces with affordable Quikrete products.

The Easy Way to Clean and Deodorize Your Sink

Keep Roots Out of Your Drain Lines with Green Gobbler