Lightning can cause extensive damage to appliances and electronic devices, including computers and TVs, even when your home doesn’t receive a direct hit. That’s because the extreme power surge caused by a lightning strike can enter your home through electrical, cable, and phone lines.

A whole house suppressor is installed at the service panel or breaker box, so it needs to be done by a licensed professional electrician. You should also check with your local utility company to see if they can provide any additional protection from power surges.

When buying a surge protector, make sure it:

While it can’t protect you from a direct hit, a system that includes a whole house and point of use approach to surge protection is your best chance to prevent damage to your home from a lightning strike. Watch this video to find out more.

VIDEO TRANSCRIPT
Danny Lipford: While fall brings relief from the heat of summer, for some it also brings some pretty stormy weather. While our homes can protect our families and possessions from the effects of most severe weather, thunderstorms really don’t really recognize those boundaries.

The problem is that the damage done by lightning isn’t confined to just the spot it strikes. Like all electrical current, lightning travels through any path that will conduct it to the ground. And if that path happens to include your home’s electrical system, the resulting power surge can damage or destroy your electronic equipment and appliances.

Most people are familiar with devices like these, which sense a surge in voltage and suppress it or interrupt its flow. These units do a pretty good job of managing the minor surges that often occur in utility lines, but these alone are no match for the surge of voltage generated by a lightning strike.

While it can’t protect you from a direct hit, a system that includes a surge protection device, like this one, at the meter, the breaker box, and the point of use is your best chance to prevent damage in your home from a lightning strike nearby.

Now don’t forget, phone and TV cable lines can also carry damaging surges, so it’s important that they be routed through a point of use device as well. 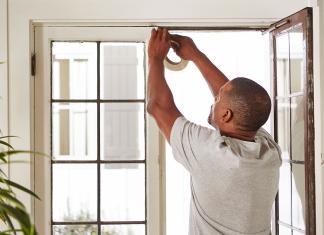 It’s been said that life has two certainties: death and taxes. But there’s actually a third thing: thermal expansion. Here's what you should know about it.