No doubt you’ve heard the phrase, “Don’t sweat the small stuff,” but sometimes it’s the little things that are successful in driving you the craziest. Case in point, some friends of mine recently moved into an older home and were in the process of moving in all their furniture. When it came time to install the washer and dryer, however, there was a slight problem.

You see they had gone to the trouble and expense of purchasing a front-loading washer and dryer with pedestals. Even though they fit in the space, the door to the washing machine wouldn’t open because it hit the cabinet in front of it.

Moving the cabinet would seem to be the simplest solution, right? Unfortunately, the cabinet contained the utility room sink, so moving it really wasn’t an option unless they wanted to go to a lot of extra expense.

Fast forward to after their phone call to me. I wanted to come up with something that was a quick and easy fix, but at the same time didn’t cost a lot of money. Here is where I finally have been vindicated for the accusation of being a packrat.

I just hate throwing away a perfectly good piece of lumber, simply because there was no need for it on the job at hand. The same goes true for plywood, especially when we’re talking about 3/4″ plywood. So, with my scraps in mind, my solution was as simple as building a platform, but it had to be a platform sturdy enough to hold the weight of the heavy duty washer and dryer.

Lo and behold, in the packrat’s possession were several pieces of 2×8 lumber, along with a little more than half a sheet of 3/4” birch plywood. It was a simple matter to build a small frame out of the 2×8’s to fill the 57” wide space. I needed to use one 2×8 spanning the width, one on each end, and one in the center. I also added a couple more pieces of the lumber to act as added support.

On the front of the frame, I used a piece of scrap 1×10 that I cut down to exactly 8″, so the top of the facing board would be flush with the top of the platform when the plywood was installed. A few 16-penny nails for the frame and some finish nails to attach the 1×10 was all that was needed to put everything together . . . at least everything but the plywood top.

Before I put the top on, I wanted to make sure the frame was attached securely to the wall. The first thing I did was to remove the baseboard. After identifying where the studs were, I attached the 2×8 frame using 3” drywall screws drilled directly into the studs. Next, I attached the 3/4″ plywood top using 1¼” drywall screws. Finally, I cut a piece of the baseboard I had removed earlier to fit in the gap in front of the platform.

Prior to any the cosmetic work on the platform, I wanted to make sure the washer and dryer operated correctly. At 8” high, 57” wide and 30” deep, the platform was perfect. The best part of it all – and here’s my vindication – it didn’t cost one red cent. Everything I used, including the nails and screws were all leftover from previous jobs.

By the way, as far as the cosmetic work goes. Since it’s in a laundry room, my suggestion to the homeowners was to paint the exposed front and sides of the base, then install a piece of sheet vinyl on top of the platform.

All in all, not a bad days work for an old packrat! 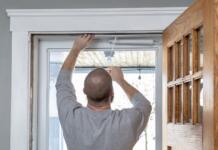 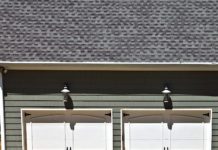 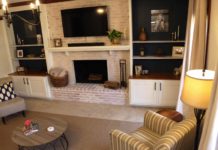 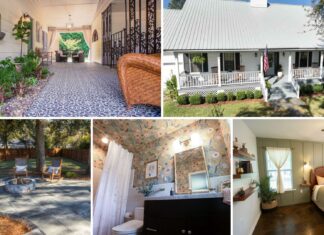