Removing a textured popcorn ceiling isn’t that difficult, if you know how to go about it, but it can be very messy. If the texture was applied before 1970, have it tested for asbestos first. If the texture doesn’t contain asbestos, you can proceed with removal.

How to Remove a Textured Popcorn Ceiling:

Danny Lipford: Removing the texture, sometimes called popcorn, from a ceiling is a fairly simple process, but one that can be very messy. If your home was built before 1970, there’s a chance the texture could contain asbestos, so have it tested before you attempt this.

This is something we get so many emails about and we’re going to show you a few tricks that will make it a little bit easier. Number one, cover everything up, that’s really important. And then, what Mike did, he took pump up sprayer, filled it up with really hot water, and then just a little bit of fabric softener, which keeps the water from evaporating so much, so that it can really help to release all of the texture from the ceiling.

But the number one thing in removing texture is getting it as wet as possible. So take off, Mike.

Danny Lipford: You’ll want to spray the whole ceiling with a fine mist of the mixture, and allow it to soak in. Then do the same thing all over again. The thicker the texture, the more time and water will be required to loosen its hold on the ceiling. Then you can begin gently scraping with an ordinary drywall knife, held at a shallow angle to remove the texture. If you don’t mind buying a special tool for this job, there’s another alternative.

See, that’s the problem with using just the regular drywall knife, you end up with that mess everywhere all over your feet. Now, this is supposed to address that concern. Here, hold that. What this is is a frame that’s supposed to hold that bag, and then this is the scraper, so as you’re scraping it falls right over in the bag. What do you think?

Danny Lipford: If it works, it makes this whole process a lot easier.

Danny Lipford: So, put it on the inside, and bring it out like that. Okay, hold that one, and put the clip on.

This scraper actually works really well, and because it has a longer handle you don’t have to constantly move a ladder. But the big advantage is that bag, which catches almost all of the texture coming off the ceiling. You do have to pay more attention to the angle of the scraper blade, since you’re further from the ceiling. And the tool gets heavier as the bag fills up. We found it quicker and easier to dump the debris out of the bag, instead of replacing it each time it got full.

Whenever possible, you want to scrape along the drywall seams, instead of across them. That means less chance of scraping up the tape that covers the seams. Around the edges you’ll have to use an ordinary drywall knife to get close to the crown molding and clean up the caulk line between the ceiling and the crown.

When the ceiling is dry, you’ll need to coat any damaged areas with drywall joint compound. In this case we had to repair the trench cut by the electrician first, but we’re also coating the all the seams. Ceilings with texture on them often weren’t finished too smoothly because they knew the texture would cover up any rough spots.

When the joint compound is smooth and dry it will need to be sanded before you apply two coats of paint to finish the job. 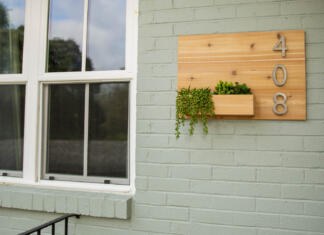 These simple and affordable curb appeal ideas can update your home while boosting its appeal to visitors and potential buyers.

How to Use Bar Clamps to Steady Woodworking Projects