Torn or punctured window screens are not only unattractive, they defeat their intended purpose by allowing insects into your home. For larger tears you’ll most likely have to replace the whole screen but for smaller holes there are other options.

Screen patch kits will cover small damage but they can call attention to themselves since the patch appears darker than the surrounding area. Small holes (1/2″ or smaller) can be repaired using clear fingernail polish.

Begin by pressing the fibers back into the original pattern and flattening them out as much as possible. Then layer the nail polish onto each side of the screen, allowing it to dry between coats. The insects are denied access and the repair is almost invisible from a few feet away. 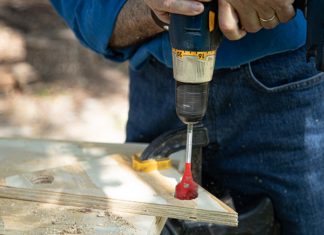 How to Use Wooden Blocks to Create Perfect Square Edges

Building a plywood box? Use clamping blocks to make sure the pieces meet at a perfect 90 degrees. Watch Joe Truini's Simple Solution on Today's Homeowner!

How to Repurpose a Folding Table into a Workbench