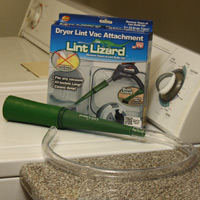 The Lint Lizard is a clear, flexible tube that attaches to a vacuum cleaner. It’s supposed to allow hidden dryer lint to be removed from inside a clothes dryer.

To use the Lint Lizard:

In our test the Lint Lizard attached easily to the vacuum cleaner hose, but the tube removed little hidden lint from inside the clothes dryer.

VIDEO TRANSCRIPT
Danny Lipford: Now for our next test, Erin Lilley Smith is going to try out a product called the Lint Lizard. It’s supposed to improve the safety and efficiency of a clothes dryer by removing excess lint.

Well Erin, you think you have the Lint Lizard figured out?

Erin Lilley Smith: I think so, it seems pretty simple.

Danny Lipford: Why don’t you grab it, and give it a try?

Danny Lipford: It’ll be interesting to see if this thing works at all you know?

According to instructions the tool attaches to a vacuum an inserts into the opening of the lint filter, but we don’t see any lint pouring down the transparent hose like we did in the commercial.

Erin Lilley Smith: I can feel lint, but it’s not sucking any of it out. There’s some lint stuck up here at the top. I’m going to see if I can get it out. Oh, there’s a little. Yeah, there’s some coming up, and I can see it going through the tube.

Danny Lipford: But what does Erin really think?

Danny Lipford: So based on Erin’s reaction, the Lint Lizard gets a 1.5 out of 5 stars.