The Versa Lift attic storage lift allows you to store items in your attic safely and easily with the push of a remote control, and bring them back down again when needed.

The Versa Lift is available in two sizes:

VIDEO TRANSCRIPT
Danny Lipford: My friend Paul Little has arrived to install a motorized lift called the Versa Lift that will help move some of the garage clutter up into the ample attic space for storage.

Paul, the joists are running back this way.

Danny Lipford: So from the information that you sent me, I guess the Versa Lift will go right in like this?

Paul Little: Yeah, we try to run it in between the—or long ways with the rafters—so that we only have to cut out one, which really cuts down on structural issues.

Danny Lipford: Oh, sure. Yeah, that makes it real easy. Well, I guess we’ll get up in the attic and take a look. Have you installed a few of these before?

Danny Lipford: Well, Paul, like you saw from the pictures, it’s all completely decked right in here, so…

Danny Lipford: I guess you just kind of want to cut in the center, huh?

Paul Little: Yeah, we want to put it in a spot where they can use it from both sides.

Paul Little: That’s the ideal spot. There’s nothing in the way. They’re not running into braces like this or worried about falling through the attic ladder.

Danny Lipford: Meanwhile, Paul has made some progress.

Man, Paul, looks like you already got this thing pretty much assembled, huh?

Danny Lipford: Man, that’s pretty cool, that’s not too bad at all. So what’s next?

Paul Little: Soon as that’s done, we can get the lift installed.

Danny Lipford: So you said that just being—having to remove and block out just one of the ceiling joists, and so we hit it lucky that this spacing is just right.

Paul Little: It’s perfect, yes. On this particular model, we want it to be 22 and a half on the insides, and from a little preliminary measurement, we are exactly 22 and a half.

Paul Little: I think what we’re going to do is we’re actually going to push it to one side so that the customer has plenty of room to walk around the end. They’ll be able to store on that side and/or pull off of each side, and they’ll still have plenty of room over here.

After marking the dimensions of the opening, we cut out the outline and remove the plywood decking, followed by the joist in the middle of the space. Then we add a piece of two by 12 on each end of the opening so we can support the ends of the joist that was cut.

Finally, Paul cuts out the drywall separating us from the garage below, and the lift is ready for installation.

All right, so we just put it right in place, huh?

Danny Lipford: And you have some lag bolts to hold it down?

Paul Little: Right over the hole, eight lag bolts, and it’s ready to drop the wire. You already have your electrical outlet in place, so, heck, we’re getting close on this thing.

Paul Little: Not too far.

Danny Lipford: Now, you know, it makes so much sense, if you think about it. How you’re able to take things from here, put it on the lift, and have it go right down into the garage. Or, of course, bring things right back up. That’s a lot safer than trying to lug big boxes up and down a set of stairs.

Back in the attic once the frame is secure, we drop the cables down into the garage, where we complete the assembly of the basket and attach the cables that will fit it.

Paul, I love this thing. Let me give it a try there and see if this thing will work for me. No, here’s who should give it a try. OK, here’s your remote control.

Danny Lipford: Push the button. Let’s see what happens. I just love that. You’ll be able to put all kinds of things on there, bring them up and down. We also put a railing around the staircase there to keep it safe when you’re going up and down.

And you can put just about anything on here except little boys. No little boys or girls can ride on this, OK? All right.

And finally, we’re getting some of the clutter up to the attic with the help of the Versa Lift. And August’s little girl, Kippen, has taken over from Chelsea as the operator.

It’s amazing how easy it is to get bulky, even heavy, items up to the attic with this thing. And once they’re there, it’s simple to take them off the lift and stack them away on the new shelves. 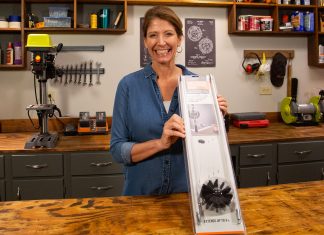 Why Everbilt’s Dryer Vent Cleaning Kit Could Save Your Home

The Easy Way to Protect Woodworking Pieces from Damage