Installing crown molding is a great way to add character to a room. While cutting crown molding to the correct angle can be tricky, for a simple room with only inside corners, it’s not that difficult.

To install crown molding in a room:

You can also install inside corners on crown molding by “coping” one end.

Danny Lipford: Wayne and Linda Goff have been homeowners for quite a few years, and in that time they’ve made more than a few improvements. When y’all did this work in here now, what did he have you doing? Were you cutting, were you nailing, were you painting?

Wayne Goff: Yeah, it is. But we need to kind of dress it up a little bit.

Danny Lipford: Well, you put some crown molding in one of the other, you were telling me about, in the other bedroom. How you had the old dark paneling that you painted and then the crown molding back there, man, that looks great.

Wayne Goff: Yeah. And the molding in here will make a big difference.

Danny Lipford: All we need to do is get these four measurements. There’s no outside corners here, so this makes it pretty easy to square up. We’ll get these if you’ll hold the other end of my . . .

Danny Lipford: And I’ll hold on to the smart end.

Wayne Goff: Give us a number over there!

Danny Lipford: Since few walls are perfectly plumb, it’s important to take these measurements up at the ceiling for the best accuracy. Once we have the length for all four pieces, we take our notes out the miter saw, which thankfully is situated out of the rain on Wayne’s front porch. By orienting the molding against the saw fence, just like it will rest against the wall, we can make a simple 45-degree cut that will allow the pieces on adjoining walls to line up perfectly. The tricky part is that this measurement is made along the bottom edge of the molding where it extends to the corner. So making the cut requires carefully eyeballing that mark and the blade to be sure they match. Back inside we sort out what pieces goes on what walls and begin putting them in place. We’ve cut these to fit snuggly so we can force out the bow in the middle so that it closes any potential gap in the corners. Wayne’s nail gun really speeds this part up, but it’s not absolutely necessary to do the job. 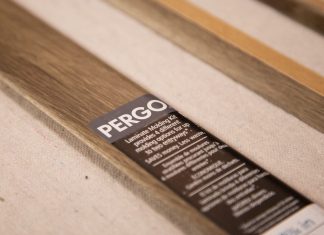 Many homeowners can install flooring, but transitioning from one surface to another is a challenge. This molding kit can help. Watch Jodi Marks' review!

How to Use Wooden Blocks to Create Perfect Square Edges