To remove finishing nails or nails that have the head broken off:

You know professional carpenters have to yank out nails occasionally, because either they’ve driven them in the wrong place, or maybe the nail bent over, or when they’re salvaging a piece of lumber and they want to remove the nail. Now you’ve probably seen this technique before where you use a couple of wood blocks as leverage which helps you pull out a nail. Or this is a technique I like to use sometimes, just rock the head of the hammer back and forth; and little by little, you’ll have to reposition, but little by little it will pull out the nail. Now the problem with that is that it can mess up the board.

Now, here’s a technique – well first of all, neither of these techniques will work in a situation like this where you have a headless nail, the nailhead broke off, or you’re using finishing nails which have tiny heads. So here’s the trick. Take a block of wood, so you can protect the work piece, and get a pair of self locking pliers. What you want to do is slip the claw over the nail shaft, then clamp on the pliers. What you’re effectively doing is just pulling on the pliers, and you’ll yank the nail right out. 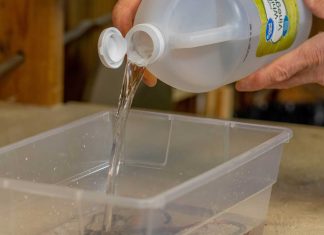 How to Smooth Ripped Boards’ Rough Edges with a DIY Sanding...

How to Make a Corner Clamp for Woodworking Projects

Keeping the Dust Down

How to Finish a Basement in Your Home