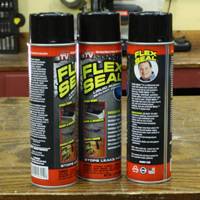 Flex Seal is a liquid rubber sealant in a spray can which claims to be able to fill cracks and holes in everything from roofs to gutters to skylights with a waterproof seal once it has dried for 24 hours.

To test Flex Seal we sprayed it on cracks and joints in a sheet metal air conditioner drain pan, then allowed it to dry for two days. When we put water in the pan, some of the joints had pulled loose, causing the pan to leak.

While Flex Seal did a good job of coating the surface, the cracks in the sheet metal seams telegraphed back through.

Tim Parker: I want to put it to the test myself.

Danny Lipford: Yeah, everybody ask me about it. We’re reinforcing this old pan by giving it a new bottom.

Tim Parker: Yeah, and what we’ll do is we’ll rivet this down.

Tim Parker: Then what we’ll do is kind of a reinforcement.

Danny Lipford: Oh, I got you, yeah.

Tim Parker: To go on here, and that will kind of give us another protection there for water to drain.

Danny Lipford: It’s not as exciting as the screen door in the bottom of a boat demonstration they use on TV, but it’s a real world repair.

Tim Parker: Danny, this is kind of extreme. So if you’ve got just a pinhole, I’m thinking this works on this, it’ll work on a just a pinhole without removing the coil.

Danny Lipford: And probably that’s what you find most of the time.

Tim Parker: Right. If this is as good as it says it is, that ought to seal any of that little crack.

Danny Lipford: I think so, too. All right, I’ll give you the honor of going around the perimeter there.

Tim Parker: It’s laying in there pretty good. We’re going to fill that whole gap in.

Danny Lipford: Well, Tim, they said to leave it there drying for about 24 hours. It’s been two days, so it looks like it applied fairly well.

Tim Parker: Yeah, that crack there that we had had, we had filled that in real well and that’s opened back up. That doesn’t look like it flexed very good to me.

Danny Lipford: Yeah, I’m a little concerned about that part of it and everything. Well, let’s pour a little water in this thing and see what you think. If you want to grab that, I’ll pull this drop cloth out, and we’ll see what happens here.

Tim Parker: We’ve got water. I was going to say that crack didn’t seal.

Tim Parker: It did not seal the gap.

Danny Lipford: After another good coat of Flex Seal and another 24 hours we poured on the water again. And it seems to hold for a moment, but then the water oozed out again. The upshot is this, Flex Seal does seem to apply easily and seal well it just doesn’t seem to be that flexible. In other word it isn’t the magic bullet the price and hype suggest. We give it 2 out of 5 stars.