This little house belongs to first-time homeowners Denver and Kara Hawsey. They know they’d like a wood deck, but they’re not sure where to start.

The couple have a 4-year-old daughter named Remi and a 3-week-old son named Rye.

They love their big backyard, which has plenty of space and nice shade, but it needs a lot of work so they can invite guests over to a real entertaining area.

Here’s the plan: We’ll remove the back porch’s existing stairs, handrails and posts. Then we’ll add diagonal braces to support the roof overhang.

The deck will be 20 feet wide and 12 feet deep with new stairs on the side nearest the kitchen door. For interest, we’ll cut out a small area in the center for a planting bed and use horizontal cables instead of traditional railings.

Removing the Back Porch

Before we remove posts holding up the roof, we add some temporary supports so we can attack the concrete porch.

We take a sledgehammer to the old railings and stairs and begin demolition. Then we just have to destroy the concrete block that supports the stairs from the back door — that’s easier said than done, but a jackhammer does the trick.

Laying Out the Wood Deck

With the old tiny back porch gone, we can start laying out the wood deck. A $4 line level is all we need to tie one landing to another, then we just add a chalk line.

We’ll start by adding a horizontal ledger board, which is the most important board we’ll put on this deck. Anytime you hear about deck failure, it’s because the ledger board was not installed correctly.

Some people just use nails and call it a day, but that won’t provide enough support — that’s why we’re bolting the ledger board to the house.

Remember: The ledger board is attached to the house; the band joists are on piers.

By attaching the two side band joists now, we can establish the footprint and height of the deck, which makes laying out locations for the support posts much easier.

Once we dig holes for the wood deck’s support posts, we mix some Quikrete Fast-Setting Concrete to pour into the forms and set “J” bolts, which will secure our metal saddles into the wet concrete.

Tip: Don’t just dig a hole, put a pressure-treated post in the hole and pour concrete around it. There could be some problems down the road. Take the extra steps to add metal saddles with “J” bolts. This will really strengthen the foundation.

Now we can continue framing and begin setting the 6-by-6 posts that will support the wood deck.

Then we attach the 4-by-4 posts to the structure below the deck with a few screws and follow those with some carriage bolts.

We’re using YellaWood’s kiln-dried after treatment boards — they’re pressure-treated but then placed back into the kiln to remove a lot of the moisture.

This lets you stain it much faster compared to other pressure-treated wood.

To create permanent support for the small roof over the back door, we cut some boards at an angle.  Then, Chelsea installs lattice around the base of the deck.

Once we attach some horizontal support and a rail cap to the handrail posts, this wood deck is ready for Denver and Kara to begin staining.

After that, Chelsea and Bear drill holes for the Feeney CableRail system, stainless steel railing that is modern, sleek and — best of all — rust-resistant.

The final touch is adding TracSafe Anti-Slip Sealer on the wood deck stairs. This transparent sealer repels water, resists mold and mildew and creates a slip-resistant surface on almost any material from concrete and ceramic to bare or painted wood.

Application is easy; you just use a 3/8-inch roller and apply one even coat, allow it to dry about six to eight hours and then apply a second coat.

Denver and Kara had a good-sized backyard, but there wasn’t any kind of outdoor living space to enjoy. Now, they’ve got a brand-new wood deck that has essentially become an additional room.

Using the deck to connect the back door and breezeway creates multiple entry points and the opportunity for a circular flow of traffic.

The deck’s dark stain contrasts beautifully with the house’s light exterior and complements its rustic style, while the stainless steel cable rail system has a slightly industrial feel and allows the deck to have unobstructed views from all directions.

Other Tips from this Episode 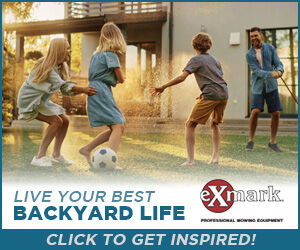