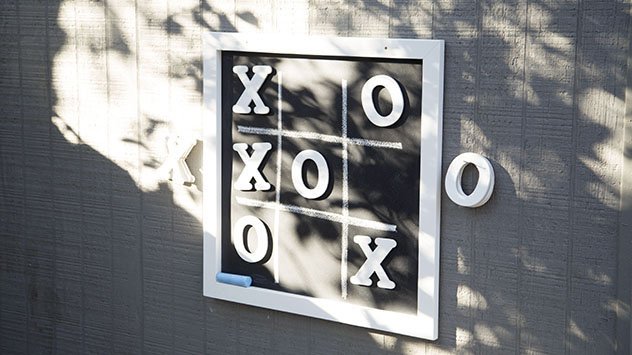 Enhance children’s play with a magnetic tic-tac-toe board for the backyard!

Start with a 24-by-24-inch piece of galvanized metal from the hardware store. The galvanized surface must be edged before painting so wipe it down with white vinegar, which is mildly acidic.

Once the surface is dry, apply a spray-on primer. We chose a dark, rust-colored primer since the topcoat will be chalkboard paint.

After the primer has dried, roll on the first of two coats of chalkboard paint. The black paint might look blue while it’s wet — don’t worry; that’s not uncommon for black latex paint.

To protect children’s hands from the metal’s sharp edges, build a simple frame from 1-by-2s cut to the metal panel’s outer dimension.

Nail the mitered corners together before painting the frame.

Buy lightweight wooden letters from a craft store for the tic-tac-toe board’s X’s and O’s. Paint them white to match the frame and attach self-adhesive magnets on the backs of these letters.

Once the frame and metal panel have dried, secure them together from the backside with half-inch sheet metal screws.

Then, hang the game for your children’s enjoyment!

Watch the video above to see the process step by step.

WATCH THE SHOW: Don’t miss “Today’s Homeowner,” which airs each week on television nationwide. Check your local listings for time and channel. Danny Lipford is among the country’s most sought-after home improvement experts.
The seasoned remodeling contractor and media personality served as the home improvement expert for CBS’s “The Early Show” and The Weather Channel for over a decade and has made more than 180 national television appearances on “Fox & Friends,” “Inside Edition,” “Morning Express with Robin Meade,” Fox Business Channel, Rachael Ray and more.
He travels the country making appearances as a brand ambassador and spokesperson, and each year contributes expertise to hundreds of popular magazines and online media outlets.
Chelsea Lipford Wolf is a born-and-raised home enthusiast, adding her crafty skills and passion for DIY as co-host of the top-rated, nationally syndicated “Today’s Homeowner” TV show.
In addition, Chelsea maintains her own home lifestyle and décor blog and award-winning web-series, “Checking in with Chelsea.”