Divide your garden into sections to make crop rotation easier.

You don’t have to be a farmer to use the age-old practice of rotating crop families – in fact, for the home gardener, the process is vitally important to the health and productivity of your garden. From disease prevention to nutrient balancing, the benefits of crop rotation make it worth the extra planning required to put the system in place. Here’s an easy way to plan a four-step crop rotation in a home garden regardless of the size.

Disease Prevention: The main reason to rotate crops is to prevent the spread of plant disease. Disease organisms can build up over time, resulting in eventual crop failure. Rotating crops keeps these organisms in check.

Nutrient Balance: Different families of plants require different nutrients. By rotating your crops, you keep the soil from being depleted and can target soil amendments to keep your garden balanced.

Nutrient Enhancement: Some plants actually enhance the soil, so rotating them through the garden can produce free organic soil conditioning.

You can develop your own rotation system based on the veggies you like to grow – for instance, if you love onions, you might dedicate a whole section of your crop rotation just to onion varieties. Or if you grow just tomatoes, cucumbers, and carrots, you can rotate those three. The main idea is that you keep things moving around.

To get started in the home garden, you can use a simple four-step system that requires little more than a basic understanding of what part of the plant you’re planning to eat. Divide your garden into four simple groups:

Group 1: Plants grown for Leaves or Flowers, such as:

Group 2: Plants grown for Fruits, such as:

Group 3: Plants grown for Roots, such as:

Group 4: Legumes that Feed the Soil, such as:

Legumes are called “nitrogen fixing” plants. They have nodules along their roots, with specialized bacteria called rhizobia, that allow them to absorb nitrogen from the air, then release it into the soil.

You can practice crop rotation in a garden of any size.

There are almost as many crop rotation systems as there are gardeners! If you’ve mastered the basics and would like to get more advanced with your crop rotation, the next step is to group plants according to their botanical family, which gives you more specific groups, and more sections of crop rotation. Here are some of the common plant families in vegetable gardening:

Try to dedicate at least one section each year to a “green manure” cover crop—such as alfalfa or clover—that you can till into the soil, or mix in plenty of organic matter and allow the soil to rest. 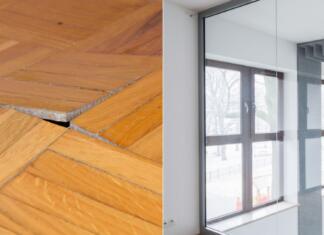 This week, listen to learn about fire concerns with open floor plans, fixing a sticky vinyl floor and more.