When using a power miter saw outdoors, it’s important to have a long, sturdy work surface. A temporary work table is easy to make using an extension ladder and two sawhorses. Here’s how to go about it:

Sometimes it seems like you spend more time setting up your tools for a project than actually completing the project itself. That’s especially true when working with a power miter saw. Homeowners will often set up the saw on the floor or on the ground, but then you have to work on your hands and knees and that’s very uncomfortable.

In this case, this is a much better idea. I made an improvised work table out of an extension ladder and a pair of sawhorses. And then I cut a piece of 1/2” plywood to fit underneath the saw, just to support the saw itself.

Now, the nice thing about this rig is that it’s about 36 inches high, so it’s nice and comfortable. And then, to support the work itself, I simply made these. It’s just a one-by pine board with a two-by-four on top.

This height is the exact same height as the saw table itself. So when I slide the molding over, it holds up one end, so I don’t have to hold it up on the saw itself. Now, in this case I used a heavy duty extension ladder, and you can see it provides plenty of support.

But, if you’re using a lighter duty ladder, you may find that it flexes and bounces a little bit. So in that case, I’d recommend putting either a third sawhorse underneath, or just clamp a vertical two-by-four, and that ought to make it nice and rigid. 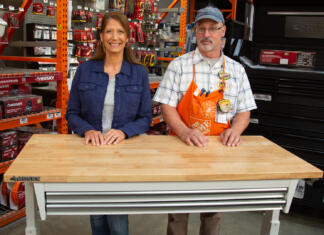 Husky’s Adjustable Workbench Is Designed With Productivity in Mind

Husky’s new adjustable workbench has an ergonomic design that could also reduce eye and back strain and boost your productivity.