Straight cuts in cement backer board can be made using a circular saw.

I just remodeled one of our bathrooms, which included tiling the floor with 12”x 12” Turkish tumbled marble. It was a fun project to work on (it’s a small room) and the tiles look terrific, but the most important step of the entire job was prepping the subfloor.

After ripping up the old vinyl flooring, I discovered that the subfloor consisted of two layers of ½” plywood; the minimum recommended subfloor thickness for tile is 1¼” So, I had to cover the plywood with ¼” cement backer board, which was set in a bed of thinset mortar and then screwed to the subfloor.

Cement backer board can be cut with a carbide-tipped scoring tool, just score and snap the sheet, similar to cutting drywall. But since I had several cuts to make, I decided to use power tools. 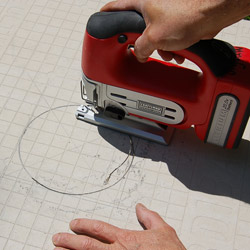 For straight cuts, use a circular saw fitted with a carbide-tipped woodcutting blade, but here’s a little secret: use a blade with the fewest number of teeth you can find. Ordinarily a blade with more teeth is desirable because it produces a smoother cut, but in this case many teeth would bog down and create clouds of thick dust. A blade with fewer teeth (mine only had six) cuts quickly and produces less dust.

To make curved cuts or circular cutouts in backer board, you have a couple of options. You could drill a series of holes along the cut line and then tap out the waste with a hammer.

While that technique works, it creates quite a mess and leaves a ragged edge. I prefer another approach that is both cleaner and quicker.

When I had to cut a 7” diameter hole in backer board to fit around the toilet drain flange, I used a jigsaw fitted with a metal-cutting blade and made the cut slowly. To be honest, I wasn’t sure the blade would cut the dense, fibrous sheet, but it did so quite easily with a minimal amount of dust.

However, I should mention that by the end of the cut I noticed that all the teeth on the blade had been worn down to mere nubs, so if you have a lot of circular cuts to make, be sure to have plenty of metal-cutting jigsaw blades on hand. 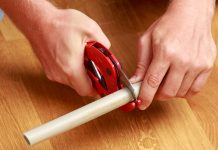 The Best Methods for Cutting and Gluing PVC Pipe

In this episode, we’re helping first-time homeowner Dawn Nelson, who’s in over her head with her kitchen renovation.