Adding a sunroom and large covered patio to this waterfront home allowed the homeowners to take full advantage of their beautiful view. Since the house is located on the Gulf Coast in a hurricane prone area, the addition had to be built extra strong to resist the onslaught of high winds.

Construction began by removing the existing back porch, and digging the footing for the new addition. 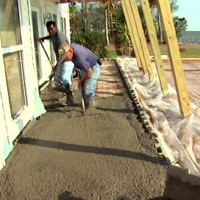 Next, the concrete footings were poured and allow to set. Concrete blocks were then laid around the perimeter of the new addition and the enclosed area backfilled with dirt. After the dirt was compacted, a plastic vapor barrier was put down, followed by steel reinforcement, and a concrete slab poured on top.

Once the concrete slab had set, the walls for the addition were framed with 2×6 lumber and temporary supports for the overhanging second-story room removed. The slab for the large covered patio was poured next, followed by framing for the covered patio roof.

Reinforcing the Walls and Roof

To resist high winds, the wall and roof framing were reinforced with steel straps on the studs and metal saddle hangers for the rafters.

Since the roof over the covered patio had a low slope, an adhesive backed, ice and water shield underlayment was used to provide extra protection from leaks. Roofing cement was also applied to each row of the asphalt shingles to increase wind resistance. The ceiling under the porch was covered with 1/2″ plywood before being finished with vinyl.

To secure the 30’ roof span of the covered patio in strong winds, the reinforced steel columns at each end were attached to the beams at the top and slab at the bottom with lag screws.

The addition walls were sheathed inside and out with plywood for increased strength, with numerous fasteners used to secure the sheathing to the studs. Large glass windows and doors were installed to give the interior of the house a panoramic view of the water. 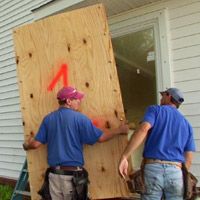 Wide brick steps were constructed across the entire length of the patio to provide easy access to the yard and serve as additional seating when entertaining. The columns on the covered patio were wrapped with fiber cement and the exterior walls covered with vinyl siding for an attractive, low maintenance appearance.

Plywood storm shutters were cut and fit to each window. Special wing nut hardware was used so the shutters can be easily installed and removed without the need for tools should a hurricane threaten.

After the exterior walls were complete, the original outside wall was removed, opening the addition up to the rest of the house. Other improvements included new granite countertops for the kitchen, extending the existing tile floor in the addition, and removing the textured ceiling.

The view of the water through the expansive glass windows and doors on the new addition really helped open up the house while the large covered patio is the perfect place for outdoor entertaining.

Quality paint brushes can last a lifetime if you take good care of them. After cleaning a brush thoroughly, use a brush comb to straight out the bristles and remove any dried paint. Wrap the brush in paper and hold it in place with tape or a rubber band.
(Watch This Video)

The Bagster is an easy way to dispose of construction debris or other trash around your home. Simply pick up the Bagster bag at The Home Depot, fill the 4’ x 8’ bag with up to 3,300 pounds of waste, then schedule home pick-up from Waste Management.
(Watch This Video)

According to a recent study, up to one-fourth of the wood used in new construction ends up as waste. To combat this, some contractors employ green building practices, such as reusing scrap lumber for blocking and grinding up any remaining waste wood to use as mulch. (Watch This Video)

Want to add some natural beauty to your home? One of the top kitchen design trends is a butcher block countertop — it brings the outdoors in and helps create serene surroundings.