These homeowners have spent the last six years renovating their entire home one room at a time. Now they’re ready to tackle the last room in the house: the master bath. Complicating the job is the fact that all the materials for the project have to be carried up a narrow spiral staircase.

This bath was in need of more than simply cosmetic changes. In recent years, cracks had developed in the tile floor, and it was discovered that the subfloor beneath it had started to deteriorate. In addition, the homeowners decided to reorganize the bath from two small rooms into one large one. 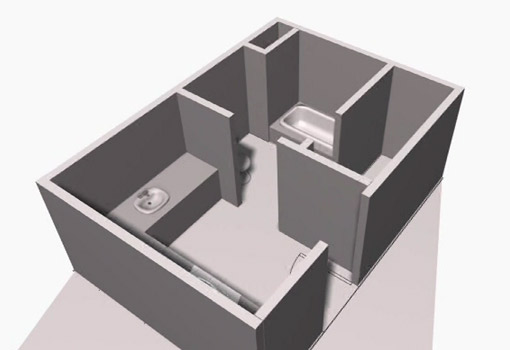 The original bathroom had a tub, toilet, and shower in one room with dual vanities in the other. The remodeled room will consist of one large (9’8″‘ x 14’) room with a garden tub in the center flanked by the toilet and a walk-in shower. The entry door on the opposite wall will be moved over to center it on the room with his and her vanities on either side. 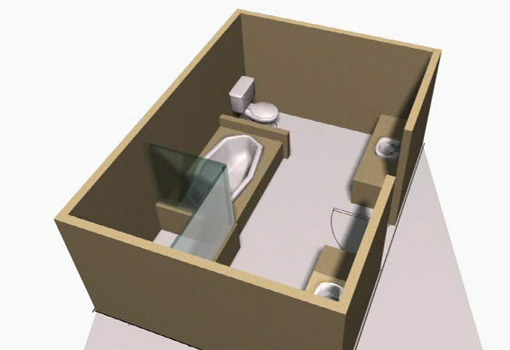 The first step was to remove the existing fixtures. Next, the room was gutted all the way down to the studs. The wall dividing the bath was removed, and the door moved to its new location.

Since much of the plumbing had to be rerouted to accommodate the changes, the subfloor was removed. This exposed several flaws in the old plumbing that had to be corrected, including replacing improper fittings and adding a trap for the shower drain so sewer gases wouldn’t sweep into the room.

That wasn’t all that was found hidden behind the floor and walls. Over the years water had seeped through to the floor and in the wall behind the faucets, causing rot to develop. To prevent this kind of damage, it’s important to caulk any seams where water might penetrate and maintain it over the years.

Plumbing lines were installed with plastic PVC pipe for the drains and copper pipe for the hot and cold supply lines. Once the plumbing had been roughed in, a new subfloor was put in place.

The last step in the framing process was building the cradle that would support the large soaking tub. Once the wiring for the outlets and lights had been run, the drywall was hung and finished.

The walls and floor of the shower area were covered with cement backer board, rather than drywall, to provide a good base for the tile. A vinyl membrane was installed on the floor and up the walls behind the cement backer board to prevent water from penetrating through the grout.

After seams in the backer board had been taped and finished with thin-set mortar, the entire shower area was coated with a waterproofing sealer. A thick bed of mortar was applied to the floor of the shower stall on top of the vinyl membrane to provide a solid base for the tile floor.

A straight edge was used to smooth the mortar and slope it toward the drain to prevent water from standing.

Once the mortar had hardened, the tile were laid and grouted.

There are many other less expensive options available for a shower than tile, such as one piece fiberglass units with an acrylic gel coat finish. If you have trouble maneuvering a single unit into an existing bathroom, you might want to consider a shower kit that comes with a separate pan and walls. Keep in mind that every seam and joint can allow water to penetrate, so be sure to install and caulk it properly.

Cultured marble is another popular choice for shower stalls which is both durable and more substantial than fiberglass. Sheets of cultured marble can be custom cut to fit and can include features such as a built-in shower seat or shelves for soap and shampoo.

Finishing Up the Bath

When the tile work in the bath was complete, the tub, matching vanities, glass shower stall, built-in medicine cabinets, wall mounted television, and other amenities could be installed.

The last step was a final finish coat of paint to cover any nicks and dings that might have occurred during the renovation process.

Even with all the extra demolition and rebuilding that occurred on this job, it only took about five to six weeks to complete the project. The finished result provided the homeowners with the final piece to complete their dream house.

Given how well the bath turned out, it was well worth the wait.

Finishing trim molding, such as door facings and crown molding, is often easier to do before installation. Lay the molding to be finished on sawhorses to prevent drips and runs. Rather than finishing with a standard bristle brush, try using a small foam roller. Not only does the finish go on faster, but there are no annoying bristles to come off in the work. Once the finish has been applied, go over it with a foam brush to smooth the finish and remove any bubbles.

Taping around moldings is an important step when painting a room, but the end result is often less than desired. Paint tends to seep under the tape, making it hard to remove and leaving an uneven line. FrogTape, from Shurtape Technologies, solves those problems by adding a thin layer of a super absorbent material that reacts instantly with latex paint to prevent it from seeping underneath. As the tape expands, it causes a break in the paint that allows easy removal with a clean, straight line. Look for FrogTape at The Home Depot stores.

Heating water accounts for up to 25% of the energy used in homes. While a tankless water heater costs three times as much to install as a conventional tank, it can pay for itself over time in the energy saved. That’s because conventional water heaters use energy around the clock to keep the water in the tank constantly hot. Tankless models, on the other hand, only heat water as you need it. This can result in 20% to 30% saving in the energy used to heat water. 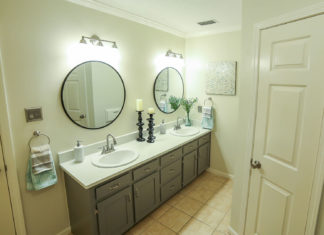