While this covered courtyard featured a beautiful brick fountain, it was hard to keep clean and received little use during the hot summer months along the Gulf Coast. To remedy these problems, the homeowners decided to enclose it by adding a fireplace flanked by glass doors.

Since the outside entranceway was level with the room, a rubber membrane was placed under the treated 2” x 4” sill to prevent water from seeping inside.

The exterior wall was framed using laminated beams to support the weight over the door openings. After the wall had been sheathed in plywood, the arched door units were held in place and the outline of the opening traced around them. A jigsaw was then used to cut out the opening.

The doors from JELD-WEN Windows & Doors included a special energy efficient Low-E coating on the glass that reduces the transmission of heat and harmful UV rays. This not only saves energy, but keeps furniture and carpets from fading.

After the exterior wall had been covered with housewrap, the doors were set in place using the same rubber gasket material to seal the thresholds to the floor.

When the door units were square and level, the flange around the casing was nailed to the wall. For added security, several of the hinge screws were replaced with longer 3” ones that go all the way through the casing and into the studs.

Openings were cut in the interior framing for the fireplace insert and flat screen TV above it. The fireplace unit is a ventless gas model, which is important since a chimney would have blocked the existing window above it.

To heat and cool the additional space, a separate unit was installed in the attic with vents cut into the room. Since a major renovation project like this can generate a lot of dust, it’s important to change the air filter at least once a week during construction. While an inexpensive fiberglass filter can be used for this, replace it with a high quality filter when the job is done.

When the framing had been completed, cement backer board was screwed to the plywood on the exterior wall to provide a firm foundation for the coats of stucco. Since backer board is hard to cut and shape, trim and accent pieces were made from foam sheets with fiberglass mesh used to give the stucco added strength.

One of the more challenging tasks was painting the vaulted ceiling. Due to its height, scaffolding had to be set up in the room so the painters could reach it. After the walls, floor, and cabinets had been covered with plastic, the ceiling was sprayed white.

The room includes a wine bar with a rack for red wine and a refrigerated cooler for white. 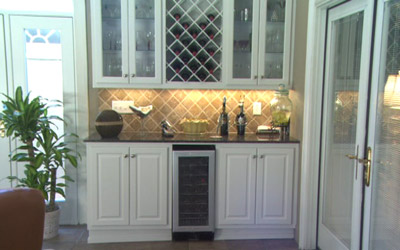 The flat screen television above the fireplace can be concealed behind a retractable painting when not in use.

Falls are the number one cause of injury around the home, and outdoor steps are often the culprit since they become slippery when wet. The solution is to install self-adhesive abrasive strips on the treads. After cutting the strips to the desired length, trim the corners at a 45° angle to prevent them from peeling up. Then remove the protective backing and press in place near the front edge of each step. Nonslip strips are available at The Home Depot stores in the tape department.

These surface mounted accent lights from Hampton Bay are perfect for under cabinets or as display lighting. The LED bulbs are cool to the touch and use half the electricity of incandescents. Best of all, they’re easy to install and last up to 20 years. Hampton Bay LED Accent lights are available at The Home Depot stores in plug-in or battery powered models.

Danny, my kids and I have really bad allergies. Is there anything worth using to keep the dust and pollen out of my house? -Bitsy from Atlanta

The first line of defense against airborne allergens in the home is the filter on your heating and cooling unit. Choose an electrostatically charged filter with a high microparticle performance rating such as Filtrete High Performance filters from 3M. While they cost more than inexpensive fiberglass filters, they’ll do a much better job of cleaning the air and last about three times longer.

Looking for mudroom ideas? We're building a small hall to separate the garage from a home's side entrance, making it more inviting for guests.