In this episode, Danny and Chelsea help Houston couple John and Donna Howard with some flood fixes following Hurricane Harvey.

“I was diagnosed in ’97 with MS (multiple sclerosis); I was told I couldn’t have this kind of house,” John Howard, a retired homebuilder, said of the couple’s two-story home.

That didn’t deter John, who got the dream home that he and his wife wanted.

However, during Hurricane Harvey, 50 inches of rainfall surrounded the couple’s home and created some challenges. Water submerged their two air conditioning units and damaged insulation under the home.

Those added to another challenge: John started building a ramp that would make it easy to roll up and down his riding lawn mower and scooter, but he can only do so much, little by little.

Not to worry — Danny, Chelsea and some local helpers can fix these issues!

John hand-picked a top-of-the-line Carrier system to replace the damaged units. Fresh Air’s guys have to remove all of the old equipment and most of the ductwork to make way for this new, more efficient system. In addition, they installed motorized dampers to divert airflow.

After all the hard work is finished, John and Donna have the easy part: They just control the Wi-Fi and Bluetooth-enabled thermostat from their phones or from the wall-mounted device. 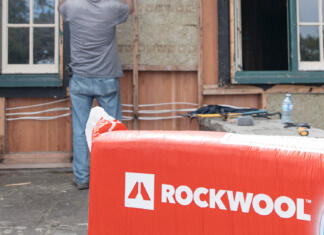 All About ROCKWOOL Insulation (Special Podcast)