Replace a damaged asphalt shingle when the weather is warm, but not too hot, so the shingles around it will be flexible and not break when lifted. To replace a damaged roof shingle on an asphalt roof:

To repair a damaged shingle you have to first separate it from the ones above and below it. A flat pry bar is the best tool to gently break this adhesive bond. Then use the bar to pry up the nails holding the damaged shingle and the one above it.

Remove the damaged shingle and replace it with a new one, driving nails just inside the edges of each tab. Don’t forget to replace the nails in the shingle above as well. Finally, for good measure, apply a little roofing cement to each of the nail heads to complete the repair. 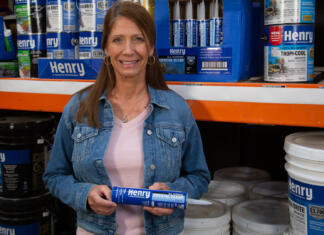 Don't wait to fix a roof leak after it rains. With Henry's new Purpose Crystal Clear Sealant, you can patch your roof while it's still wet!

Why Metal is the Best Option for Reroofing Your Home