Old linoleum is a major source of asbestos. Ripping it up can release untold numbers of microscopic pieces of friable asbestos into the air.

If you use proper techniques, the danger of exposure to asbestos resulting from the removal of small quantities of vinyl tile or sheeting from the home is not as great as when removing other materials containing the deadly fibers.

By virtue of quantity, removing 60,000 square feet of tile from a floor in a school or other commercial building poses substantially more danger than the same process in a 50 square-foot bathroom. The degree of asbestos contained in a given building material factored with the amount of the material to be removed determines the degree of danger.

Improper removal of any asbestos material in any quantity can be dangerous. However, most small home flooring removal projects don’t require a special apparatus used to create air-tight conditions and expensive filtration devices used to sterilize the air.

If you take certain precautions, you can remove asbestos flooring safely without the need for special equipment and without the expense of an abatement contractor. The trick during removal is to keep the asbestos confined to the material which contains it. This is not terribly difficult to do with flooring.

Tiles are safer to remove than the sheeting because the asbestos is held together by the vinyl (which is not hazardous). Do not sand the tiles. Sanding will release dangerous quantities of asbestos into the air. Some floor adhesives contain asbestos, so take the same precautions with the glue as with the tile.

The safe way to remove the tiles and the glue is with a floor scraper (looks like a large putty knife on a shovel handle) and warm water. Scrape the residue left after popping up the tiles – don’t sand it. If you have to sand, call an abatement contractor.

Asbestos vinyl sheet flooring can be more dangerous to remove than tiles if you don’t practice proper precautions.

The vinyl sheet flooring has two layers, a top layer of vinyl and a bottom layer made from paper (that contains asbestos). The paper layer can contain from 40 to 70 percent asbestos.

During removal, avoid pulling the vinyl layer away from its paper backing as much as possible. Separating the two layers could possibly release a dangerous level of asbestos into the air.

On concrete floors, scrape the flooring with a floor scraper using warm water to loosen the adhesive as you go. The moisture will soften the adhesive and help reduce the amount of asbestos released into the air.

Folks licensed in asbestos abatement tell us that removing the floor in large chunks is reasonably safe. However, breaking it into little tiny pieces during the process could be dangerous.

The Environmental Protection Agency’s (EPA) guidelines for asbestos abatement allow for small amounts of asbestos-containing material to be removed from a home without the use of special procedures or equipment (vacuum chamber, special breathing apparatus, filtering devices, etc). Use the list at the end of this article to call for more information.

Barbara Cohrssen, industrial hygienist and environmental health consultant from Cohrssen Environmental in San Francisco, Calif., tells us that “proper removal procedures are extremely important”, and that, “some people will do anything to save a dollar. However, it may not be the safest way to do it.”

The French actually did a study some years back which showed that sweeping vinyl asbestos tile with a broom released small (but measurable) amounts of asbestos. A similar study was done in the United States, and those results were negative. That is, sweeping tests made in the U.S. did not cause asbestos to be released from vinyl asbestos flooring material. 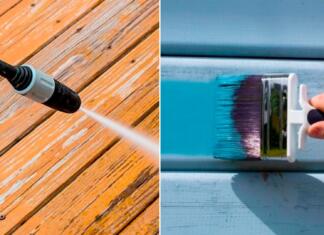 In this week's radio show, learn the reason why toilet water is low, the best temperature for outside painting and more.