What a fantastic week! Danny & I are in Guilford, CT taping the final episode of our 18th season of the Today’s Homeowner television show. Guilford is just 15 minutes east of New Haven and our reason for being here is to fulfill our promise to the latest contest winner you heard us talking about on previous radio broadcasts. It’s the Royal Building Products Build Bold contest and the lucky winner is Karen O’Leary. Her home definitely needed a bold statement. Portions of the house had aluminum siding original to the 1968 construction. Other parts had vinyl. The color was drab, plenty of damaged spots and unfortunate vertical seams where aluminum met vinyl. This will be one impressive BEFORE and AFTER!

Since we’re up here, it was a great opportunity to talk radio while on the road, but it’s not quite the glamorous life you may think. In fact, I set up the entire “mobile studio” inside my hotel room!

But it wasn’t always work, work, work! If we’re spending time in New England, you can bet we’ll be sampling the local cuisine. Danny was dreaming for days about getting his hands on some of the world-famous lobster rolls.

Plus, we got to spend a little time with our buddy, Joe Truini, who hosts the Simple Solutions segment on our television show. 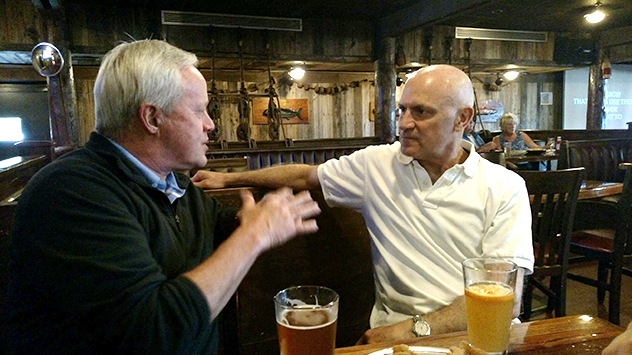 Enough about food and friends, though. Let’s talk radio for this week! We had several calls and emails this week regarding moisture problems…from water in a garage to water seeping into a basement. One of the most important things you can do is to make sure any water moves away from your home. Sometimes it’s as simple as making sure you have the dirt around your house sloping in the right direction. Danny always likes to recommend taking a stroll around the house during a rainfall and carefully observe any areas where water may be flowing in the wrong direction or could be ponding.

We also discussed a few ideas for “enhancing” a porch column. Small 4×4 posts can be pretty dinky-looking. It’s really easy to use 1×6 material to box around the 4×4, then use a 1×8 material and moulding to create a base cap to add dimension to the post. Here’s a great how-to video from Today’s Homeowner that shows Danny replacing a damaged base cap, but it will give you the information you need to add one from scratch.

One of my favorite questions this week dealt with hanging a flag on a block wall. Rather than trying to glue a flag up, which will ultimately have wrinkle issues, I would consider adding some grommets on the opposite side of the flag so you can hang it on the wall from each of the four corners.

Our mystery question of the week came from Becky who says a strange rut appeard in her yard and at the end of the rut was a hole, but no loose dirt around the perimeter. She thinks it could be, possibly, an animal or (horrors!) a giant snake!! Danny seems to think it was just a tree root that had decomposed and finally caved in. What do you think it could be?

We’ll be back in the studio next week, but only if I can convince my new friend to let me leave. Who knew chipmunks were so possessive?? 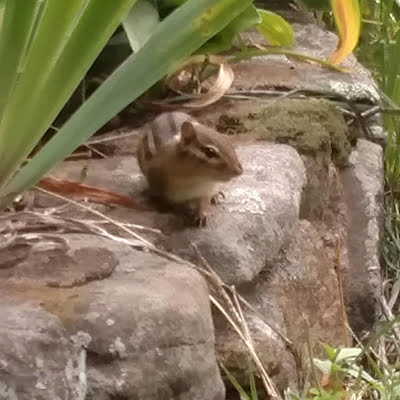