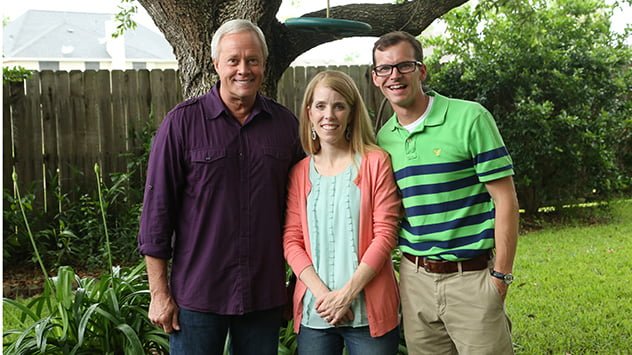 MOBILE, AL (May 12, 2015) – Expert Home Improvement Guru and National Media Personality Danny Lipford is taking his 17 season, Emmy-nominated television show – Today’s Homeowner, on the road to film on location in the greater Houston area. Danny and his crew will be shooting a “Backyard Paradise” episode the week of May 25 at the home of local Pearland couple. Broadcasting nationally and drawing a weekly audience of over 1.5 million viewers, Today’s Homeowner with Danny Lipford currently airs on 206 TV stations.

Wes and Kelli Holloman and their Texas-sized family of seven, are the lucky winners of a national “Pavestone Paradise” contest sponsored by Today’s Homeowner and Pavestone. Over 4,000 contestants submitted photos of their current backyards along with wish lists in hopes of winning the opportunity to have Danny and his crew transform their outdoor space from “blah” to “beautiful”. In addition to Danny’s expertise, the grand prize package includes a variety of pavers, retaining blocks and project kits from Pavestone and is valued at $10,000.

Some of the specific projects that Danny and the team will tackle include:

Danny comments, “So many people are intimidated by DIY and home improvement projects. We’re excited to work with Wes & Kelli to transform their backyard and show our viewers how easy it can be. As a family of seven, we know the Hollomans will appreciate having a more usable, kid-friendly outdoor living space!”

The Today’s Homeowner episode featuring the Hollomans and their “Backyard Paradise” improvements is set to air the week of June 22, 2015.

Today’s Homeowner is a national, multi-media home improvement brand including Danny’s Emmy-nominated television show, Today’s Homeowner with Danny Lipford, airing in 206 markets across the country and reaching 1.5 million viewers each week, his weekly syndicated radio show and 90-second vignettes, airing on 150 stations across the U.S., his destination website, TodaysHomeowner.com, drawing over 1.3 million unique monthly viewers, and the Telly award-winning web series, Checking In With Chelsea.