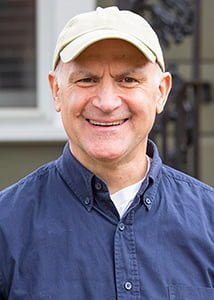 Truini is a familiar voice to the Today’s Homeowner audience as host of Simple Solutions, the most popular segment of the brand’s television show, for nearly two decades. With the departure of the show’s former co-host, Allen Lyle, Lipford says, “It was a natural fit to bring Joe into this new role at Today’s Homeowner. He is so well-respected in the home improvement industry and brings a wealth of experience to the broadcast booth. Our audience will enjoy his professionalism and wisdom.”

Joe Truini was born into the home improvement business as the son of a remodeling contractor and began working alongside his dad at the age of 12. He pursued a formal education in the field and worked as a union carpenter on large commercial projects, including the cancer research center at Yale-New Haven Hospital and the only PEZ factory in the U.S. He also spent time as a residential remodeling contractor, and four years as a custom cabinetmaker in Miami, FL.

“It has been a great pleasure working with Danny for the past 18 years, and I’m now thrilled to be joining him as co-host of the Today’s Homeowner Radio Show,” Truini says. “As a homeowner and avid DIYer, I know how frustrating it can be to find accurate, unbiased advice about your home and yard. I’m looking forward to providing reliable information to homeowners all across the country.”

Truini’s impressive career includes writing for a number of national publications including This Old House, Popular Mechanics, Fine Homebuilding, Woman’s Day, and Today’s Homeowner magazines. He has also authored eight successful books, including three best-selling shed-building books for Taunton Press. He continues to serve as an expert source and freelance writer from his home in Litchfield County, CT.

Danny Lipford is America’s Home Expert and one of the most respected and sought-after names in the home improvement industry. As president of Today’s Homeowner Media, Danny anchors the brand’s Emmy-nominated, nationally-syndicated Today’s Homeowner Television and Radio Shows, delivering fresh, practical and trusted advice for maintaining and improving homes to millions of consumers. As the go-to home improvement expert for media, he has made more than 170 national television appearances including FOX & Friends, FOX Business Channel, The Weather Channel, HLN and Morning Express with Robin Meade. He contributes to hundreds of broadcasts, websites and print publications annually.

Today’s Homeowner is the fastest growing home improvement programming in the country, including the weekly two-hour, nationally syndicated Today’s Homeowner with Danny Lipford show and Tips for Today’s Homeowner vignettes which collectively air on over 210 FM, AM, cable and internet stations each week.