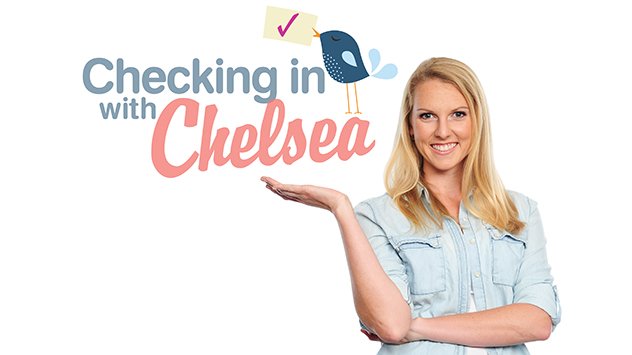 MOBILE, AL MOBILE, AL (Aug. 19, 2015) – Chelsea Lipford Wolf, host of the award-winning lifestyle web series and blog, Checking In With Chelsea, marked the one-year anniversary of her media brand with the debut of a newly designed website on August 1, 2015, along with a special web series episode guest starring her dad, National Home Improvement Expert Danny Lipford of Today’s Homeowner.

Chelsea and her dad filmed the anniversary episode at their family River Cabin that Danny built over 30 years ago. In the episode, Chelsea demonstrated how to incorporate natural elements into DIY projects. She and Danny upcycled a basic mirror and dated table lamps to add some style to the cabin’s rustic décor.

The new CheckingInWithChelsea.com introduces a variety of features for followers and media to ensure an interactive and user-friendly experience and make it easier than ever for visitors to follow Chelsea’s latest episodes and projects. Visitors will find a simplified, modern navigation making it easy to locate information, a personal house tour showcasing Chelsea’s before and after home renovation projects to date, and an opportunity to subscribe to the site. Chelsea has also added in the latest feeds for her Instagram and Facebook profiles offering real-time content updates.

“I love the updated, feminine look of the site and all of the new features that make it easier to navigate,” says Chelsea. “My favorite addition is the house tour! I wanted to invite people in to my personal home to show them the ongoing transformation, and offer some inspiration to tackle their own spaces.”

Additional resources for media have also been introduced to the site including an image gallery with downloadable photos and logos, a newsroom with recent articles and press about Chelsea and her brand, and a media personality page showcasing Chelsea’s diverse experiences and talents as a brand ambassador.

About Chelsea Lipford Wolf & Checking In With Chelsea
Chelsea Lipford Wolf was born and raised a home enthusiast in Mobile, AL. As the daughter of National Home Expert Danny Lipford, Chelsea has grown up in the world of home improvement and ultimately established her own DIY voice with an original web series and blog titled Checking In With Chelsea.

Checking In With Chelsea launched in July 2014 and earned two 2015 National Telly Awards which honor outstanding work in video and film productions. The web series and blog chronicle Chelsea’s unique perspective on projects for the home. Whether she’s tackling a simple home repair or a more creative décor project, Chelsea enjoys transforming the everyday ordinary into extraordinary.