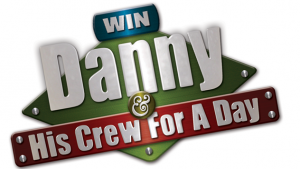 MOBILE, AL (Jan. 18, 2016) – America’s Home Improvement Expert Danny Lipford has launched his national “Win Danny and His Crew” contest for 2016, just in time to rescue waning new year’s resolutions. For those who vowed to tackle projects around house this year, this popular contest could bring new inspiration with the winner enjoying expert advice and crew labor to turn wish-list items into reality.

As host of the nationally-syndicated and Emmy-nominated “Today’s Homeowner” TV show, Danny Lipford works with homeowners each week, delivering expert advice and hands-on help to complete projects and improve homes. His popular radio show by the same name offers tips and guidance to listeners on a wide variety of home improvement and DIY topics. “The most often-asked question I get throughout the year is ‘How can I get you to come to my house?’,” Lipford says. “The ‘Win Danny’ contest is the answer. Each year I look forward to reading the thousands of entries we receive and learning what projects fans have in store. I can’t wait to meet this year’s winner and get started!”

The “Win Danny and His Crew” contest kicks off today, January 18, and runs through February 14, 2016. The winner of the contest, sponsored by Leviton, will receive:

Fans can enter the contest online at www.TodaysHomeowner.com/WinDanny. Entrants should explain what’s on their home improvement to-do list in 100 words or less, and include a video or photo if available.

As a contractor for 37 years, Danny Lipford is one of the most respected and sought-after names in the home improvement industry today. He has made more than 160 national television appearances on shows such as Rachael Ray, LIVE with Regis & Kelly, CNN’s Your Bottom Line, CBS’s The Early Show and This Morning, and is a regular on Fox Business Channel’s The Willis Report. Lipford has been the home improvement expert for The Weather Channel for over a decade, a longtime contributor to Better Homes & Gardens Magazine and BHG.com, and is a source for hundreds of other popular magazines and websites each year.