After several upgrades, Chelsea’s mid-century rancher is not only energy-efficient but it’s also full of smart home technology. Listen to this special podcast to learn about the projects and find inspiration to make your home smart and energy-efficient!

Insulation in the Attic and Crawl Space

Anytime you can see ceiling joists in the attic, one thing is certain: you need more insulation.

We placed ROCKWOOL Mineral Wool Insulation perpendicular to the joists. (This is an affiliate link. If you purchase this product, we will earn a small commission at no additional cost to you.)

We also added it underneath the house to make it more energy-efficient and comfortable all year round!

Installing a new heat pump in Chelsea’s home has already made a huge difference. This American Standard Heating and Air Conditioning unit has variable speeds; this means the system is on almost all the time but on a lower speed, depending on the current need.

It actually helps your system work smarter because it’s not turning on, working at its full power, and then shutting off. With the motor and fan, Chelsea can control the humidity and cool her house down quickly.

When choosing a heat pump, always consider the SEER (Seasonal Energy Efficiency Ratio) rating. The higher the rating, the more efficient the system will be.

Chelsea’s new system has a SEER rating of 20, so we can expect it to last a lot longer and save money on her energy bills.

Chelsea installed smart light switches so she doesn’t have to change her habits. Instead, the device — which she can control by app or voice — recognizes her habits and automatically adjusts its settings.

It also has a schedule for when Chelsea is out of town or not home during the day. Not only is this convenient, but it also keeps Chelsea’s home lit up and safe!

Chelsea chose a subtle smart lock for her home. From the outside, it appears to be a normal doorknob and lock, but the small device where the deadbolt is contains a secret!

Its motor is concealed inside the door and adapts to the exterior hardware of the existing lock. She can control it with an app or key.

See more from Chelsea’s Ranch Revival on our special landing page for this series! 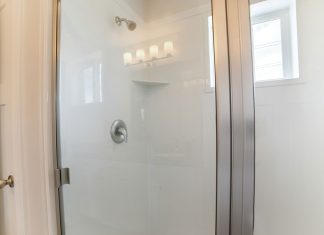 How to Paint a Fiberglass Shower Surround | Ep. 139

There are a lot of different products out there when it comes to painting a fiberglass shower surround. Here's our advice for tackling this project.