If you’ve never tried muscadine or scuppernong grapes fresh off the vine, you’re missing out on a fantastic Southern treat! With their thick skins hiding a burst of the most wonderful juicy grape flavor, these native grapes are worth celebrating.

My grandmother used to make muscadine-fig preserves that would knock your socks off, and I can just eat them by the handful! They’re also frequently made into pies, juices, and very sweet wines.

About Muscadine and Scuppernong Grapes

Muscadines are the oldest native grape in America, first cultivated by Native Americans over 400 years ago. They grow naturally in the coastal plains of the southeast United States, with hardier cultivated varieties grown farther inland. They’re named for their rich, musky aroma, and the flavor is absolutely to die for.

To further confuse you, there’s also a particular cultivated variety called ‘Scuppernong,’ so it’s a good idea to pay attention when buying vines for your yard. 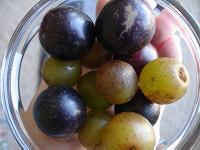 If you’re lucky, you can find large wild muscadine vines growing up into native trees along the roadside. You might need a ladder to pick them, but it’ll be worth it!

Also, look for muscadines and scuppernongs at your farmer’s market or grocery store around mid to late September. Trust me – all you have to do is rinse them and set them out in a bowl, and they’ll be gone in minutes!

If you live where muscadines grow, you may be surprised to learn how many people grow cultivated or wild varieties in their backyards. You can grow muscadine or scuppernong grapes in your yard, if you’ve have:

When shopping for muscadine vines, be sure to pay attention to the plant gender. Some varieties are “perfect-flowered,” which means the vines have both male and female flowers and it can pollinate itself. Other varieties are female only, and they’ll only produce grapes if you plant them alongside a perfect-flowered variety. Popular varieties include ‘Magnolia,’ ‘Thomas,’ and ‘Nobel.’

Muscadine vines can be a little difficult to get started, but once established they’re marvelously drought, pest, and disease tolerant – not to mention vigorous! To get a proper muscadine crop, you may want to read up on proper pruning and trellising techniques. To find out more, read this article on Muscadine Grapes in the Home Garden from North Carolina State. 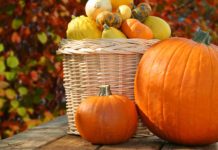