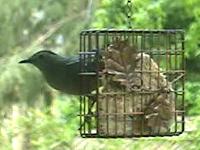 I love wildlife, and I love having a yard that is welcoming to animals, even in my downtown neighborhood. I put out several kinds of bird food, because I enjoy the territorial catbird who follows me back and forth as I mow the lawn, usually with a wad of suet in his beak, and the chickadees and finches who fight over the thistle and other seeds. But man, between the chattering squirrels, the pudgy ’possums, and the sneaky raccoons, my bird feeders don’t stand a chance! 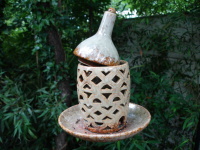 As you can see from the photo, they’ve completely abandoned the work of pulling seeds out of the feeder holes like civilized bandits. Instead, they just take the lid right off and help themselves! And my cat is no help – I once watched a squirrel run right up and smack Houdini on the nose before he had a chance to react, then – I swear – collapse in giggles on the lawn. (Houdini doesn’t know I was looking, so we go on pretending he’s a mighty hunter). There was an opossum in the back yard this morning, and a young raccoon in the bushes last night, and a groundhog waddles by every now and then as well. 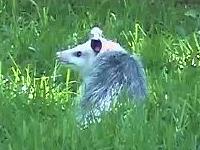 Some gardeners go to great lengths to combat the greedy critters that take over even the smallest of gardens. So far, I’m still watching the proceedings from the sidelines, because I know if I ever get started, it’ll be a battle fit for the history books, complete with an embarrassing arsenal of baffles, whirligigs, rubber bands, and – possibly – explosives. During this uneasy peace, the entertainment is more valuable than the bird seed, and I keep my camera handy for the showdowns.

Learn how pest control costs vary by the type of pest you’re dealing with, the severity of the infestation and the number of treatments your home needs.