Enclosing an existing covered porch with screen simply requires you to build a stud wall or walls along the open sides to create surfaces for attaching the screen.

In this case, we’re removing the rails because the spacing of the balusters is wrong and they’re in bad shape. The new walls will be constructed from pressure-treated 2-by-4’s, which we have primed and painted ahead of time.

We begin with a horizontal piece aligned with the corner post and the trim board on the house. We’re using 3-inch galvanized nails to secure the new material.

Next, another horizontal piece is attached to the beam overhead before a vertical 2-by-4 connects the two.

We’re adding a vertical one at the midpoint between the wall and the post, so we have a place to overlap our 36-inch-wide screen a little bit later.

Adding horizontal boards at handrail height makes the raised deck safer. Below that we’re also adding balusters; this is important for safety, but it will also prevent the screen from being kicked through accidentally.

Clamping a 1-inch-wide scrap to the rail helps us center each baluster as we nail it in place, and a spacer block makes it easy to gauge the distance between them as we move down the line.

We’re cutting the 36-inch-wide screen to length for each opening before we begin stapling it in place. The important thing is to avoid wrinkles without pulling the screen so tightly that it stretches out of shape.

Any excess screen is trimmed off with a utility knife. To cover the staples, we nail up treated wooden lattice strips along the edge of each 2-by-4. These are also pre-primed and painted like the studs to minimize painting with the screens in place. 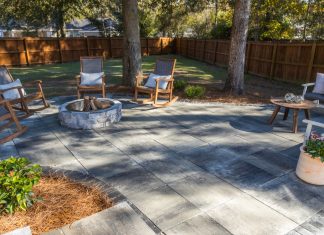