This summer has just been one big blast so far! My partner, Steve, and I took a little needed R & R during the month of June down in the British Virgin Islands! 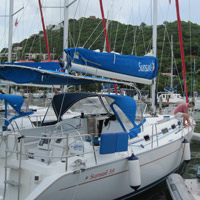 Many moons ago, Steve was a professional sailing captain for 7 years in the Caribbean. So we figured Tortola was the best launching port for my maiden voyage on a sailboat.

Admittedly, I was a bit nervous! Never having taken a cruise, I was unsure what to expect . . . . Would I get seasick? Would I feel safe out on the waters miles from shores? Would there be pirates!?

Trying to soothe my fears as much as possible, Steve had the trip all planned out…Tortola, Virgin Gorda, Anegada and plenty of fishing, snorkeling, and fine dining. Just what the doctor ordered.

Climbing aboard the 39’ Beneteau, and getting settled in no time, Steve’s first order as captain was that I take the helm . . . 8 days later he had to pry my hands from the wheel! 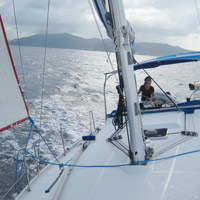 Jodi at the helm.

I was amazed at just what goes into sailing a boat! Ropes are called lines. Those rubber bumpers that keep the boat from smashing against the dock are called fenders. Who knew wearing gloves out in the ocean would save your palms and give you more hoisting leverage when raising the main sail and the genoa.

The trip was filled with laughs, sun, new experiences and gorgeous places. This truly was a dream vacation. Now, if I could convince my daughter to get on a boat, we just might have to go there again!