We often hear about dividing and propagating perennials, but what about shrubs? While usually thought of as fairly permanent, some types of shrubs can be divided and propagated, if you know what to look for and how to go about it.

A few years ago, my mom called to ask if I wanted an overgrown Japanese aucuba bush in her yard. What I found wasn’t a shrub, but a monster larger than I could reach around which had been growing undisturbed for 25 years.

Even after a severe pruning, the shrub and root ball pretty much filled my truck bed, so I decided to divide and plant it as several separate plants.

Here’s how I went about transplanting and dividing one large shrub into several separate plants for my yard.

Shrubs can generally be divided into two types: 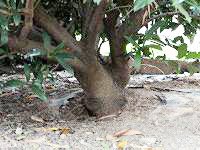 Tree-like Shrubs: These shrubs have a central woody trunk coming out of the ground. This trunk is permanent, and damaging or cutting it will kill the shrub. Azaleas, arborvitae, and laurels are examples of tree-like shrubs. These shrubs are what they are – you can’t cut the trunk in half, and if you divide off a clump of roots, it won’t sprout a new trunk. Tree-like shrubs can often be propagated by seeds, cuttings, or layering; but can’t be increased by division.

Cane Shrubs: These are shrubs that have multiple shoots (known as “canes”) growing out of a single clump of roots. Cane shrubs constantly grow and regenerate their canes, and it may be possible to remove existing canes without causing damage to the new ones. Cane type shrubs include some aucuba, shrub dogwoods, forsythia, lilacs, nandina, potentilla, skimmia, and spirea. Depending on how they grew, it may be possible to divide and propagate these shrubs.

Can I Divide My Shrub?

IF the shrub has cane-like growth, and IF there are multiple (say, 5-6 or more) healthy canes growing out of the root ball, you may be successful in dividing and propagating it. However, you really have to evaluate each shrub independently. For example, nandina may be a cane grower, but I have one in my yard that’s formed a pretty substantial central trunk with no other canes, so that particular plant can’t be divided. Division generally works better with older shrubs that have plenty of canes or roots, rather than newly purchased young plants.

How to Divide and Transplant Shrubs

If you’ve determined that your shrub can be divided, the process is fairly simple:

Prune Shrub: Cut the foliage on the shrub back by about a third to make it easier to handle and reduce the plant’s water and nutrient needs as it forms new roots.

Divide Shrub: Some shrubs will fall into pieces when you dig them up. If not, use a shovel or sharp knife to gently tease or cut the shrub apart with minimal cutting and damage, making sure to get one or more canes and a nice root ball with each division.

Plant Shrub: Plant the new shrub pieces at the depth the plant was originally. The divided shrubs will be top heavy and might need staking, but resist the urge to heap soil around the stems to hold them up. I like to include a sprinkle of potassium rich bone meal to nourish new root growth.

Shrub TLC: Water the transplanted shrubs every couple of days for several weeks until they start putting out new leaf growth, then cut back to weekly watering. When I say “water,” I don’t mean a puny sprinkle, let the hose run on each one for a minute or so. About once a month during the growing season, feed transplanted shrubs with a balanced organic fertilizer. Pinch plants back periodically to help new shrubs branch out.

My grandfather used to divide cane shrubs by taking his sharp shovel and slicing it deeply into the ground, cutting a clump away from the mother plant. He’d leave the entire shrub in place, cut in two but still growing, for several months, to give the new division time to heal. Then he’d dig off the division and plant it. If you have that kind of patience, his method is a lot gentler.

Three years later, you’d never know my Japanese aucubas started as divided transplants. They looked scrawny for the first season as they put down roots, but then they began to flourish.

If you’ve got the right kind of shrubs, division can be a great way to turn one shrub into many. It takes patience to get them established, but in the long run you can get a lot of bang for your gardening buck! 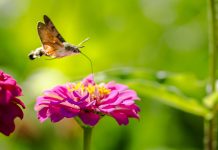 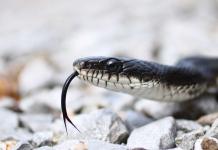 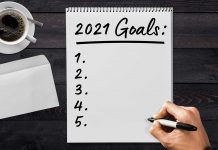 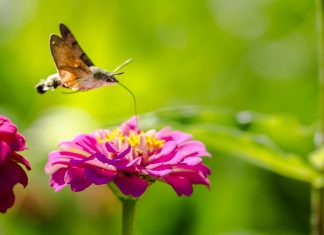