Next up in our extensive renovation of the 1926 Kuppersmith Project house came insulating the walls and attic, hanging and finishing the drywall, completing work on the porches, and painting the outside of the house.

One big change to the house was installing a central heating and cooling HVAC system, which the home had never had before. Much of the ductwork along with one of the heating/cooling units was located in the attic of the house.

To make the Kuppersmith house more energy efficient, Icynene expanding foam insulation was sprayed between the rafters in the attic as well as in all the outside wall cavities of the house. Made from caster bean oil, the foam expands to 100 times its size when sprayed.

Insulating between the rafters eliminated the need for attic ventilation and will keep the air in the attic within 10 degrees of the interior of the house during both winter and summer. It also increased the energy efficiency of the HVAC system in the attic, since the conditioned air in the ductwork won’t be exposed to extreme temperatures. 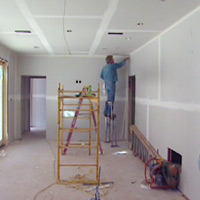 Once the foam insulation had been installed and trimmed flush with the walls and ceiling, the UltraLight Sheetrock® made by USG Corporation was hung.

Before drywall finishing began, a careful check of the plans was made to make sure all the holes in the drywall had been cut for the numerous plugs, switches, recessed light fixtures, and other wires to make sure nothing had been accidently covered over.

Next, the seams in the drywall were taped and finished with several coats of joint compound and sanded smooth.

The painting and staining on the outside of the house by CertaPro Painters started with applying caulking to all the nail holes, joints, and cracks.

The trim was then primed using High Hide Cover-Stain oil-based primer from, which is great for sealing both the composite and wood materials we used on the house. Two coats of finish paint were then applied, and the cypress shakes sprayed with stain.

Front and Back Porches

The ceiling on the back porch was covered with V-groove cypress to blend with the cypress shake siding on the house. As Frank Vallot of the Southern Cypress Manufacturers Association explained, cypress lumber is not only beautiful, but the heartwood contains a natural oil that makes cypress resistant to rot and decay. Cypress wood can be painted, stained, or left unfinished to weather to a silver gray. 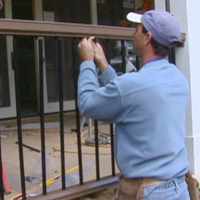 A two-part epoxy wood repair system from Abatron was used to repair the deteriorated wood on the front porch columns. After coating the rotten wood with liquid epoxy to harden it, epoxy putty was used to fill any voids in the columns.

Designer Joe Boehm of Better Homes & Gardensmagazine worked with Merillat cabinets on the design, layout, and finish of the many cabinets for the house, as well as helping with other aspects of the interior design elements.

With the drywall hung, the new kitchen cabinets could be delivered and installation begun.

To make a custom shelf to hold spices in your kitchen cabinet, glue and nail a three-sided shelf together that’s wide enough for your spice bottles (2½”). Attach a 1”x 2” support under the shelf, and position it in the cabinet so it rests on the shelf supports. (Watch This Video)

The EcoSmart 10.5-watt LED recessed light fixture bulb comes complete with ceiling trim. It screws into an existing recessed light to produce the same amount of light as a 65-watt bulb. The LED bulb uses 85% less energy than an incandescent bulb while lasting many times longer. The EcoSmart LED bulb is available at The Home Depot. (Watch This Video)

To conduct your own home energy audit, start by turning off any gas appliances; close all doors, windows, and fireplace dampers; then turn on any kitchen and bathroom vent fans. Use the movement of smoke from a stick of lit incense to find air leaks in your home. Finally, seal up any cracks or gaps to reduce air infiltration in your home. (Watch This Video)