Is it just me, or do other gardeners look outside in late summer and find that their yard has grown into an impassable jungle? I’m always preaching that the best time to prune trees and shrubs is in early spring while they’re dormant, and yes, technically that’s right. But here in late summer where I live, the rumbling afternoon thunderstorms inspire a flush of vegetation that makes me wonder if I’m in a rainforest. And inevitably – usually on the hottest afternoon on record – I’ll “have it up to here” (sometimes literally), and I’ll head outdoors with my pruning shears.

This time, I marched right through the grasping rose tendrils, ducked under laden tree branches, dodged falling walnuts, and headed straight for the real problem area – the overgrown bamboo hedge, the fence, and the wild grapevine that attempts a hostile takeover every year. I chose that spot because it’s the toughest to tame, it was 95 degrees, and that’s how I roll. It’s an annual tradition. 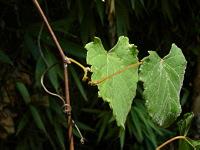 De-vining the hedge is a tug-of-war that never fails to involve some tumbles, as the vine slips loose from the tall shrubs and trees in its grasp. And cutting back the bamboo involves reaching into the depths of the tight spider-webbed hedge to sever 20-foot towering rogue stems, which then fall – in slow motion – down onto my head. The entire mess must then be bear-hugged and hauled up to the street for the mulch truck. It’s a great way to vent frustration, and if you don’t have any to vent, it’ll give you some!

But after an hour or two of wrestling, the rewards finally come into view – a mountain of cuttings higher than the cars, a tamed, tidy yard to admire over a nice tall iced tea, and a body that will sink down into a bubble bath with blissful relief. This down time – after tackling a tough job, and before the poison ivy sets in – is a reflective, serene time. 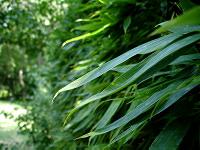 For my oft-overworking brain, the summer pruning chores are the perfect therapy, as a cloud of cognition distills down into a few very clear and concrete tasks: cut this, pull that, pick up the pieces, and watch for snakes. The simple focus, the physical work, and the well-deserved rest afterward are enough on their own, but usually I’m surprised to find that whatever was on my mind has detangled as well, leaving me with a clearer vision and sometimes a few answers. I’ll take that any way I can get it!

This year’s vine-a-palooza might in fact be the last one – or, should I say, it’s about to be someone else’s problem. But as I look toward moving away from one jungle, I’m pretty sure that if the next place doesn’t present its “opportunities” right away, I’ll seek them out soon enough!