The sun’s magnetic and sunspot cycles are expected to peak in 2013, bringing a stormy season to our solar system and an increase in sun related damage here on Earth. While you don’t need to grab a tinfoil hat and head for the nearest bunker, it’s a good idea to take precautions to protect your home from possible damage caused by solar flares and solar storms.

Our sun is a massive ball of superheated gases that swirl with incredible currents and magnetic fields. At times the pressure builds up into sunspots, which can explode out from the sun in events known as solar flares and coronal mass ejections (CMEs).

These “solar storms” bombard the solar system – and Earth – with radiation and magnetic shock waves that can wreak havoc on magnetic fields, power systems, and electronics devices. The Earth’s atmosphere shields us from much of the radiation, but solar storms can still do quite a bit of damage, including:

Solar events happen all the time, but 2013 is predicted to be a particularly bad year due to the peaking of several sun cycles. The last time this happened was in 1859 when the largest recorded solar storm spun compasses, disrupted telegraph service, and lit up the skies. Our dependency on electronics and an overloaded power grid makes us much more vulnerable to solar storms today.

The biggest threat of a solar super storm is a knockout of the power and communications grids that might take some time to repair. You can prepare for this the way you’d prepare for any kind of storm, by stocking up on:

Likewise, a powerful solar storm may cause major power surges that might fry anything in its path. Protect your electronics by using:

The biggest threat of solar storms is on a systemic scale (such as taking out cell phone service) rather than an individual scale (like damaging individual cell phones). However, the magnitude of solar events is unpredictable, and we don’t always know the effects solar radiation will have.

If you’ve done any reading on the subject, you’ve found all levels of paranoia about shielding yourself and your home from radiation, with all manner of solutions. My favorite was to build your house with a radiation-shielding pool of water on top – who doesn’t love a rooftop swimming pool?

Short of such radical measures, it doesn’t hurt to be prepared, and one of the easiest ways to shield items from electromagnetic radiation is with an insulated, sealed metal box called a Faraday cage. It can be made of solid metal or wire mesh and needs to be completely enclosed, with an insulated liner so that nothing inside comes into contact with the metal.

To protect emergency backup electronics such as a radio or laptop, put them (unplugged) inside a sealed cardboard box, then wrap the box completely with aluminum foil. Another solution is to line the inside of a metal garbage can with cardboard. During peak radiation storms, it’s a simple matter to put your small electronics inside and close the lid.

If you’re really into radiation protection or are concerned about the health effects of solar storms, the same principles can be applied on a larger scale. People have gotten pretty creative with this principle by lining rooms (and even entire houses) with radiation-shielding metal mesh. And yes, some even try to shield their bodies with Faraday inspired suits and hats.

Keep up with the latest solar storm predictions at Today’s Space Weather on the NOAA website. 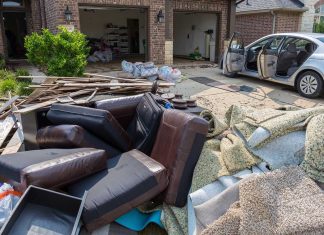