I have a loud hum in our telephone line. The phone company says it’s inside the house. Is there any type of a device that can locate the cause of the problem? – Jim

Hi Jim,
There are a number of things that can cause humming or static in a phone line including a short in the wires, a defective phone, interference from power wires or light fixtures, and a signal from another electrical device.

Here’s how to go about isolating and repairing the problem:

You can find out more about working on phone lines in the articles: 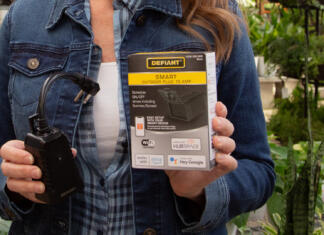 The Defiant Wi-Fi and Bluetooth-enabled outdoor smart plug gives you the same wireless control you have with indoor smart devices.