Buying a home comes with a number of risks. Hiring a home inspector may mitigate some, but prospective homeowners also should be familiar with common home defects.

Polybutylene water piping is just one of them.

What Is Polybutylene Water Piping?

Polybutylene, also known as “poly,” is a type of plastic water pipe that was used for residential homes around 1978 to 1995.

NACHI.org estimates that during these years, up to 10 million homes had polybutylene installed for the home’s domestic (potable) water pipes.

In the Washington D.C. metro area, poly typically has a bluish-gray color. Other regions may have silver, white, black or cream-colored poly piping.

During the 1980s, numerous problems were found with leaking poly pipes, especially at the pipe fittings, resulting in class-action lawsuits. It is now known that poly has an extremely high failure rate, and has caused sizable water damage to homes across the country.

Unlike CPVC or copper, poly is not glued or soldered together. Poly uses a compression install method known as “crimping,” which uses metal rings (or bands) to fasten the pipes with fittings — a similar method to modern PEX piping. 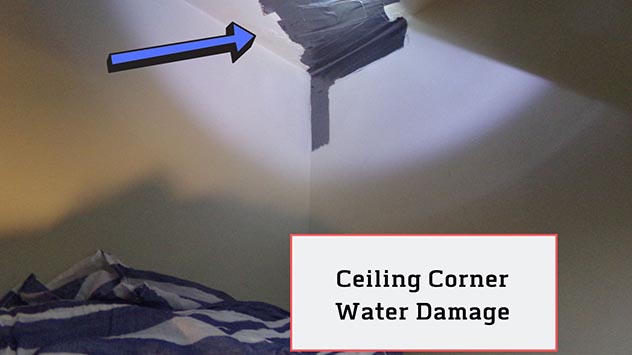 Initially, it was thought that a number of possible causes were related to polybutylene’s failure.

One aspect was the incorrect or poor installation of poly. Poly was installed using a crimping tool, and if this tool was improperly calibrated, fittings may be installed too tight or too loose — leading to eventual failure.

However, researchers realized that poly was highly sensitive to chlorinated water. Disinfectants in the water supply cause microfractures in the polybutylene, which led to cracks and flaking.

Deterioration of the piping’s interior would eventually work its way outward — resulting in a slow leak or a dramatic pipe burst. At the beginning of this process, degradation is invisible; it is only visible when it shows up on the exterior of the pipe, and at that point it’s too late.

Later, researchers realized that all poly piping is susceptible to cracking and deterioration — not just at the fittings.

Testing standards in the 1970s weren’t nearly as robust as today, and poly was later found to be vulnerable to disinfectants in the public water supply.

During home inspections with poly piping, it is common to spot water stains in drywall ceilings or walls. If water pipes are below the home, such as in a crawl space, a homeowner may never even notice the leaks.

Leaking pipes may only be realized when the water bill has increased dramatically, and just one small plumbing leak can cause significant water damage to a home’s wood framing, flooring, walls, appliances and furniture.

Water leaks may result in weakened joists and may even cause floor sagging in certain areas of the home. Several small plumbing leaks may result in costly damage that, put together, may be just as expensive as it would be to replace the entire home’s piping.

Another danger with recurring water leaks is that moisture may lead to mold growth.

Unless someone opens the walls and notices the leaks, the mold may remain undiscovered for a long period with mold spores pulled into the home’s interior air supply. Excess moisture can also attract termites, and result in structural wood damage.

Besides actual damage to a home, poly may lower the home’s value and/or cause it to sit on the market for much longer than the average home. Some real estate agents won’t even list a home with polybutylene because of difficulty in selling the property.

A buyer may also have trouble getting homeowner’s insurance, or if an existing insurer finds out that the owner has poly, may cancel the policy.

Why Poly Was Used Instead of Copper

Poly was first introduced under the brand name Qest and was marketed as a much cheaper alternative to copper piping.

Besides the cost difference, poly was also much easier to install. Unlike copper, no soldering was required; in fact, just one simple crimping tool was used to fasten the poly together — a compression type of installation.

Plumbers could stop lugging around acetyl or propane tanks to each job site, as needed for copper. With the ease of installation, it could literally shave weeks off a whole house plumbing job — thereby boosting profits of builders and plumbers. Plumbers even trained non-plumbers on how to install poly for a complete house job due to its easy and fast installation.

There was also research that showed poly had excellent resistance to freeze-thaw cycles. 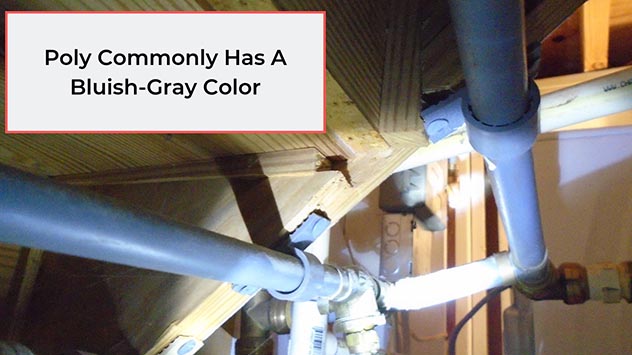 Signs of a Home with Poly

During home inspections, it can be quickly evident that a home has polybutylene. There are almost always numerous water stains and drywall patches all over the house. And even if the poly pipes were replaced, it can be difficult to hide every water stain or patch job.

Usually, the old poly that has been replaced is simply left in the ceiling cavities and is visible in the basement or utility room — sometimes old poly is still sticking out under sinks.

Polybutylene in many areas is a bluish-gray color and is distinctly different from copper or CPVC. A sure way of identifying polybutylene is that most of the piping will be stamped with “PB2110” somewhere on the pipe. But even without the PB2110 designation, if you know what CPVC and PEX look like, it will be easy to identify poly.

CPVC is a cream-colored plastic piping with a yellow stripe along its length. CPVC is the most common type of domestic water piping in newer homes.

PEX is a newer type of plastic piping, and it is usually colored red (for hot water) and blue (for cold water), but PEX is also sometimes clear-colored for domestic water, and can even be black. PEX always has a stamp of “PEX” on the water pipe as well. 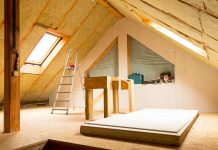 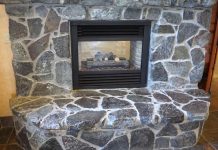 Changing the Mortar Color on the Fireplace 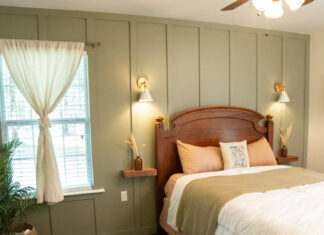 Board and batten adds a geometric, layered effect to both interior and exterior walls. Here's how to get the look!