The back porch addition on this historic home had several interesting features, included a large fireplace and decorative scroll cuts in the bottom of the exposed rafters that matched the design on the house.

Watch this video to see how the foundation for the porch was constructed and the framing installed.

Danny Lipford: We have a series of nine pier holes here, and you can see the rebar coming up from it. We also have rebar down in the holes themselves, to really provide a lot of support there. But this is the big foundation, that’s going to support the heavy masonry fireplace. And masonry fireplaces weigh thousands of pounds. This will take care of any weight concern that anybody may have there. Now, what they’re doing is they’re, of course, about to finish everything up. And then smoothing everything out, so that we’ll have it nice and level for our block masons, that’ll be the next step in the project.

Now the block masons are putting together the piers that will support the deck and the massive foundation for the outdoor fireplace. Finally, the carpentry can begin, with a network of floor joists, bridging the spaces between the cinder block piers. Even though this framing is pressure treated, it’s separated from the masonry piers by metal flashing to create a barrier for termites.

On the outer edges, the posts that will support the roof are leveled and tacked in place. Later, they will get considerably more support. The tops of the posts are notched on one side to support the beams that will connect them. These beams are joined together with ceiling joists across the width of the porch, before the guys start assembling the roof system.

The bottom or the tails of these rafters will be exposed, just like those on the house, with the same detailed scroll cuts, so everything matches. All those cuts and the modified hip design of this roof add up to a lot of work. But the effort will be worthwhile, if we could mimic the existing construction the way we hoped to. 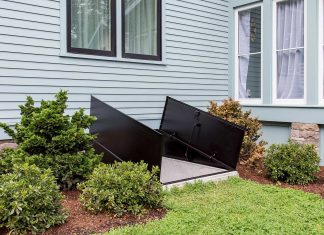 Tips for Finishing Your Basement

It's important to think of the basement as extra living space; its own separate floor to design and furnish. Here are tips to finish your basement.

How to Fix a Leak in the Basement with Quikrete

How to Drywall a Basement Wall

3 Tips to Keep Water Out of Basements

Converting a Basement, Attic or Garage