There are a number of factors to consider when framing a floor for a home building project, including:

Different types of wood vary in stiffness and resistance to bending, with some species being much stronger than others. Even within the same species there is considerable variation in strength depending on the growing conditions of the tree.

The lumber from slow growing trees, which have more end grain growth rings per inch, is much stronger and denser than faster growing trees of the same species.

The strength of common wood species used for framing includes:

The grade of lumber used for joists is also a factor in determining the strength of the wood. Since knots and other defects weaken wood, higher grades of lumber (designated as clear, select, or #1) are considered stronger than lower grades. Higher grades of lumber, however, are also much more expensive. 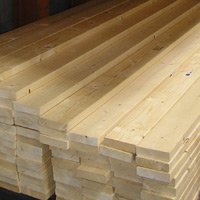 Lumber graded as #2 is the most common choice for floor joists and other framing lumber. It has more knots and defects than higher grades, but usually not enough to cause significant loss of bending strength.

Lower grades of lumber (designated as #3, utility, and #4) often have too many large knots or other defects to be used for floor joists.

Regardless of the grade of lumber used, try to choose boards which have few knots or defects and that are straight, with little crook along the length of the edge.

When possible, position floor joists with any crook in the board facing up, so the weight on the joist will tend to straighten it out. Any large knots found near the edge of the board should face up as well, so the weak wood of the knot will be compressed rather than stressed.

The width of a board is an important factor in determining the distance a floor joist can span, playing a much larger role than the thickness.

The amount of weight on the floor is also an important factor in determining joist size and span length.

The weight of the building materials (joists, subfloor, flooring, and ceiling) is known as the dead load and is commonly rated at 10 pounds per square foot. 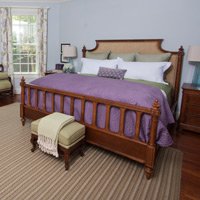 You can calculate the dead weight yourself by adding up the weight of the building materials, then dividing by the number of square feet the materials will cover.

The weight that will be placed on the floor is the live load and includes furnishing, people, and anything else you plan to store on the floor. Live loads range from 30 pounds per square foot and up, with 40 pounds the norm for most residential rooms and decks.

Obviously if you’re a piano collector or plan to crowd as many people as possible onto your deck, you should err on the side of caution and increase the size of the floor joists or reduce the span.

Putting all these factors together gives the minimum size joists needed for various types of wood, grades of lumber, sizes of boards, spacing of joists, and the load that will be placed on the floor.

You should also check your local building codes before starting construction and consult a structural engineer in unusual or extreme situations.

Below is a table giving the minimum size floor joists needed for 16″ and 24″ on center (o.c.) spacing when using #2 lumber with 10 pounds per square foot of dead load and 40 pounds of live load.

You can always use bigger lumber, closer spacing, or a smaller span; just don’t go smaller, further apart, or a longer span. In other words err on the side of caution rather than pushing the envelope.

How Lumber Is Cut and Graded 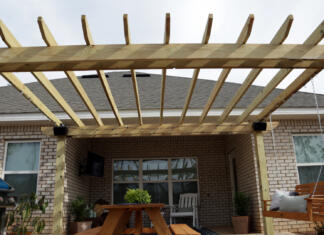 Pergolas shade you from the sun, but don't keep the rain out. Build a pergola roof to keep you dry during pop-up rain showers!