Editor’s Note: TodaysHomeowner.com originally published this story on Oct. 28, 2010. It’s so popular that we are happy to share it each year on Halloween. Enjoy — and please share your spooky Halloween stories in the comments below!

This year, I’m looking around my house and thinking I’m pretty well set for Halloween, and it’s all authentic!

There are spiderwebs in the door frames, crackling leaves on the walkway, and creepy shadows cast by bare branches in the streetlights. Behind the house looms a big old spooky dead tree that I can’t bear to cut down because it’s housing a family of woodpeckers.

For a ghoulish flair, my big black cat lost a fight and is lurking around with a gory, simulated gash on his head, with a look of embarrassment that (in dim light) might be perceived as a menacing leer.

And the “decorations” aren’t just outdoors – inside my old fixer-upper, I’ve got creaking floors, flickering lights, and of course, the Hallows’ Eve Guest of Honor: the Old Spice Ghost.

The Old Spice Ghost is exactly what it sounds like: a strong, unmistakable scent of Old Spice cologne that occasionally comes to visit, lasts a few minutes, and departs.

The first time it happened I was home alone, and it scared me half to death! With a friend on the phone for moral support, I shakily opened every closet and peered under every bed, dreading an encounter with a freshly shaven marauder.

Once I confirmed that I was the only human in the house, and nothing icy tapped me on the shoulder, I chose to file the Old Spice Ghost away under “Weird, But Nothing to Worry About.”

Maybe it’s a visit from Mr. P, who originally built the house and whose daughter sold it to me. If so, I hope he likes what I’ve done with the place.

Or maybe a neighbor likes to shave with the windows open.

Or maybe it’s simply a few escaping molecules from an old spill deep in the floorboards or ductwork.

It’s always a little off-putting, though, because I never can figure out where it’s coming from!

What I do know is that the Old Spice Ghost is not in my head – several guests have been visited by it as well, at unpredictable places and times.

It’s definitely real and definitely mysterious. However, the occasion is accompanied by such a complete lack of creepy vibes that, so far, nobody seems the least bit terrified.

Oh well – so much for a haunted house!

Hey, Mr. Ghost, if you’re trying to scare us off, you might want to try something that doesn’t bring back comforting memories of our grandpas. 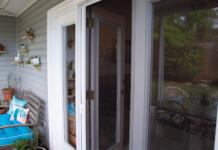 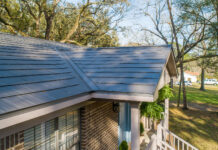 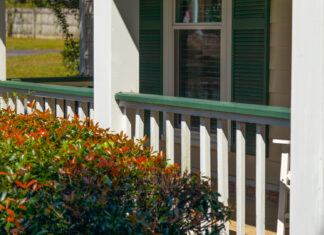 Front porch railing can either be cozy or claustrophobic. Here's how to remove it, and also how to repair it if you absolutely need it.